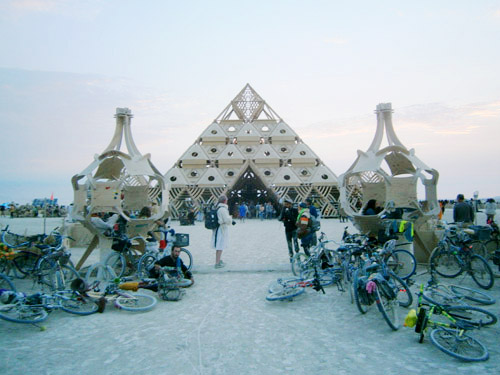 The adventure is about to begin, and things are happening quickly…

Last week I was invited to present a TED talk at Burning Man, a week-long festival in Nevada’s Black Rock Desert. I gave a ten-minute presentation entitled ‘The Art of Giving’, about the ideas and attitudes that led to the development of The Human, Earth Project.

The venue was a large geodesic dome, filled to capacity with a wonderfully attentive audience. Sections of the wall had been opened and there were hundreds more braving the heat and dust of the desert outside.

Even those who had heard my rehearsals in the preceding days told me they were amazed and moved by the final presentation. The speech was recorded and I hope to share it with you all before the end of the month. Thank you to everyone who was able to attend.

I have also been interviewed recently for a number of articles, which will be appearing in English and Italian over the coming week or so. Here’s one by Matt Bailey of Live Limitless that’s already online.

Today I received a large box full of packing peanuts and four thousand dollars worth of video and audio equipment, including the first reflex camera I’ve owned since I gave up photography almost three years ago.

Tomorrow I’ll be crossing the Pacific from east to west, and Marinho will be coming the opposite direction around the globe. We’ll rendezvous in Indonesia on Sunday, and begin the search for the first of our hundred subjects on Tuesday morning. It’s getting exciting!

I’ll leave you with some images of the temple at Black Rock City, which was razed to the ground on the final night of the festival, leaving only the black stone inukshuk at its core…