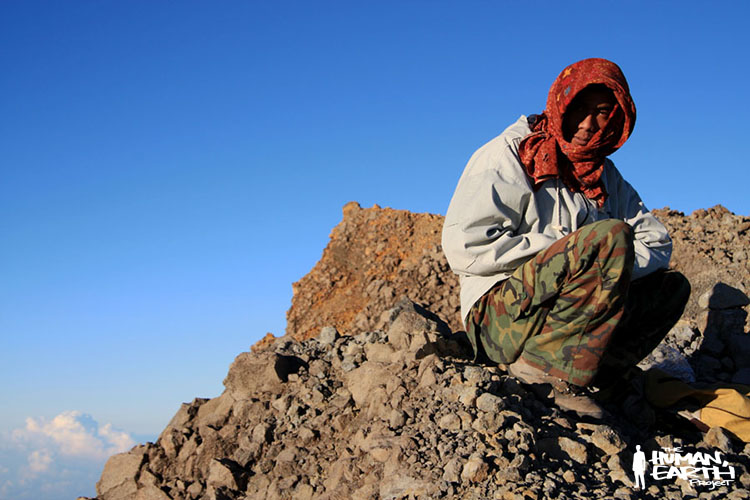 In the past ten days we’ve had to deal with sickness, injury, lost and damaged equipment, language barriers, inflated prices (with the inevitable white man’s “skin tax”), and even the threat of murder and violence.

Our most persistent opponent, however, has been misinformation. In Asia, saving face is of the highest importance, and in many places, people would rather invent an answer than admit that they simply don’t know.

Last week, on our search through southern Lombok, I can’t tell you how many times we were promised that the people we were looking for awaited us in the next village, or how much time we lost to help others save face. Yesterday evening, we arrived here on the slopes of Mount Rinjani to begin the search for a guide and two porters I’d photographed five years ago. We were told that the guide was not a guide at all, merely another traveller, and that the two porters could be found in another village, an hour’s ride from here.

Today we woke at dawn, packed our bags and prepared to leave, only to be told that all three men could in fact be found living a short distance down the road. The guide is indeed a guide. His name is Dewa, he’s 27 or 28 years old (he’s not exactly sure!) and has climbed Rinjani over 500 times. Two years after our first meeting, Dewa was married, and now has a small son. He works hard and puts a little money aside each week, hoping to provide a better future for his son, whom he envisages as a doctor, a policeman, or a government official.

Tomorrow morning, at half past seven, he’ll be climbing again. Misinformation plagued us again on our search for the porters. We were given three separate names for the man on the left, and directed to three separate villages where we were told he could be found.

It was already dark by the time we found his mother, his wife and his daughter, and were told his real name.  He’s been working in Malaysia for the past three years and, by chance, is flying home tonight to see his family. We’ll meet him tomorrow evening.

The two porters live within two hundred metres of each other, and we’ve already spoken the man on the right. I’ll introduce you to him in my next post. It’s been a long day, and our most successful to date. We’ll give ourselves a pat on the back, get some well-deserved rest, and begin again tomorrow!

Please share this around, and let your friends and family know what we’re doing!