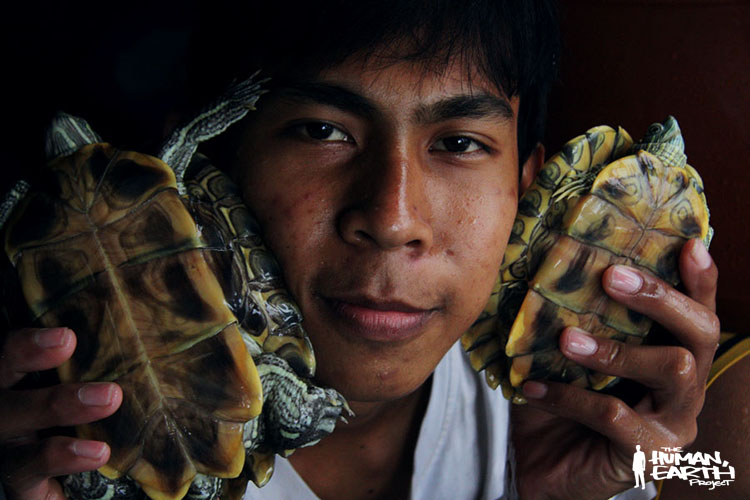 We’re three weeks deep, and have been putting a lot of road behind us in the past few days. Gone are the lush forests and broad sandy beaches of Bali and Lombok; in their place, the madness of Java, the world’s most populous island.

New Zealand’s south island has a population of almost exactly one million people. Java, which is slightly smaller, has 135 times as many people. 28 million of those people – more than a fifth – are crammed together in and around Jakarta, the capital.

We’ve come looking for three of them, battling the suffocating heat, exhaustion, plagues of mosquitoes, traffic, pollution and the ticking clock. The first of the three, fortunately, is a friend of mine, a young man named Wandi. He was seventeen years old when I first met and photographed him at his home, washing his two pet turtles. Wandi is now twenty-two and has a young family of his own. To support them, he works in a restaurant for twelve hours a day, six days a week, and couldn’t be happier. His life is perfect, he says, hoping only that Allah will bless him with more children. The real hunt begins tomorrow, as we begin the search for two much more difficult subjects: a newborn baby I photographed five years ago, and an apparently homeless man sleeping on the street.

There are only seven days until our Indonesian visas expire and we cross the straits to Malaysia. In that time, we have three people to find, and eighteen hundred kilometres of bad road to cover. It’s going to be a long week.

I’ll leave you with some footage which aired live last week on Lombok TV’s Sasak Tulen, featuring an interview with myself about The Human, Earth Project, which was a lot of fun… Mulen maig meton!

(Which is to say, in the local Sasak language, It’s really good, bro!)

Please share us around, so your friends and family can see what we’re doing!