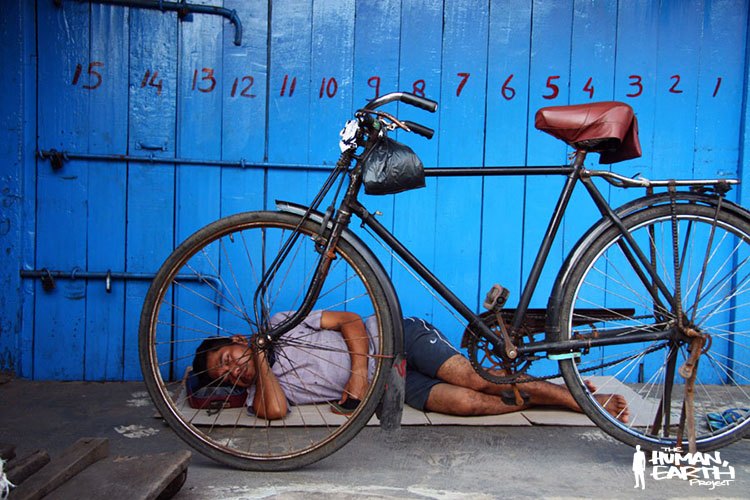 They told us it was impossible.

All the locals here in Indonesia who saw my photograph of the man with the bicycle assured us he was homeless, a drifter. Of all our one hundred subjects, apart from M herself, this man was the one they agreed we’d never find.

And then there was the portrait of the baby, my youngest subject. How could we ever hope to find him? The two photographs were taken in a back alley in Jakarta, within fifty metres of each other. I pieced together memories, landmarks from photographs I’d taken whilst meandering through the city five years ago, and clues from the guidebook I’d carried, and we found that alley. I recognised it immediately. And we found Saputra – or Chuchu, as his mother calls him. She hopes that one day he’ll work in the nearby fish markets. It’s a good job, she says, with a 2,000 rupiah (US$0.18) profit on every kilogram of fish sold.

Chuchu himself was somewhat overwhelmed by all the attention, and ran off to play with his friends.

And then a man came walking by, wheeling a dolly. The local people we were sitting with jumped up and started yelling and pointing at him, and at us. They’d already seen my photograph, and this was the man with the bicycle. This was the impossible one, the one we’d never find. His name is Ismet, and he’s far from homeless. He’s married, with three grown children, and works in the store I photographed him in front of, as he did five years ago. The store was closed when I took the picture, and Ismet was taking his Sunday siesta outside.

Sometimes, for a little extra cash, he’d pick up tourists on the back of his bicycle and take them from the train station to the nearby museum, making 5,000 rupiah (US$0.44) with each trip. In the photograph, the spare seat is his pillow.

Today Marinho and I were interviewed for RCTI TV, one of the major national networks here in Indonesia. The interviews will form part of a larger segment on human trafficking, to be aired at a later date. Tomorrow we’re hoping to speak with one of the local organisations working against human trafficking, before we set out on a long journey through the Sumatran jungle in search of this boy, our final subject here in Indonesia.

Share us around, and let your friends know what we’re doing!