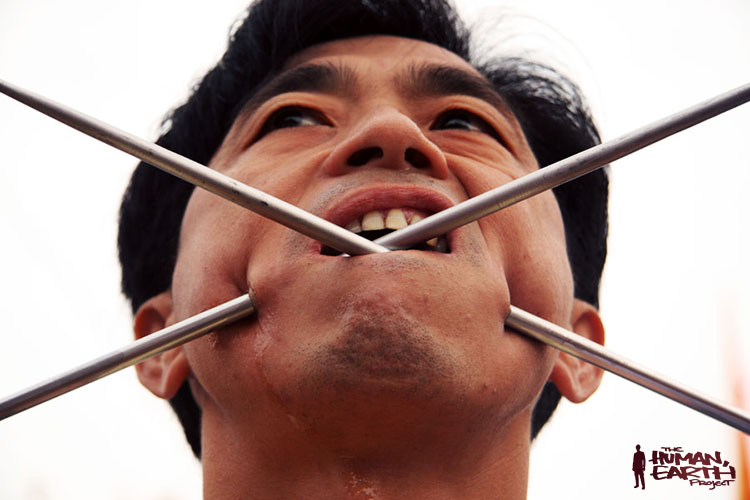 At last, after a relentless first month on the road, Marinho and I have a chance to breathe here in Phuket, Thailand. Rather than the beach relaxation we’d hoped for, we’ve found illness, injury, and the tail end of the Thai monsoon.

We arrived during the Nine Emperors’ Festival. Also known as the Vegetarian Festival, it’s a celebration remarkable less for its cuisine than for the hundreds of spiritual mediums channeling deities and enduring pain in endless creative ways.

For nine intense days, the mediums walk across burning coals, bathe in hot oil, climb bladed ladders, maul themselves with knives and axes, detonate chains of firecrackers against their bare skin, and are pierced with all manner of unusual objects through their faces. In 2009 – or 2552, by the local calendar – I was living here in Phuket, managing a custom sportswear business and experimenting with fashion photography. At the Nine Emperors’ Festival four years ago I photographed this man, his cheeks pierced by metal rods. We came back to find him, and to grasp the beliefs behind the festivities.

It’s been six days since we first arrived here. The festival is long since over, and we still haven’t found our man. As usual, we’ve been given wildly conflicting stories. Some say he’s a local man who has been frequenting the temples and channeling deities during this year’s festival. Others say he’s from another region of Thailand, and was unable to attend this year for financial reasons. His name may or may not be Tay.

Each year dozens of people are injured, or even killed, by the vast quantity of explosives detonated in the streets and temples during the festival. This year I came very close to losing an eye when I was struck in the face by a fragment of an exploding firecracker.

We’re taking a few days here to gather our forces and edit the first of a series of short films about our search we’ll be sharing online. Then we’ll be pushing further north, to begin another busy month in Burma…