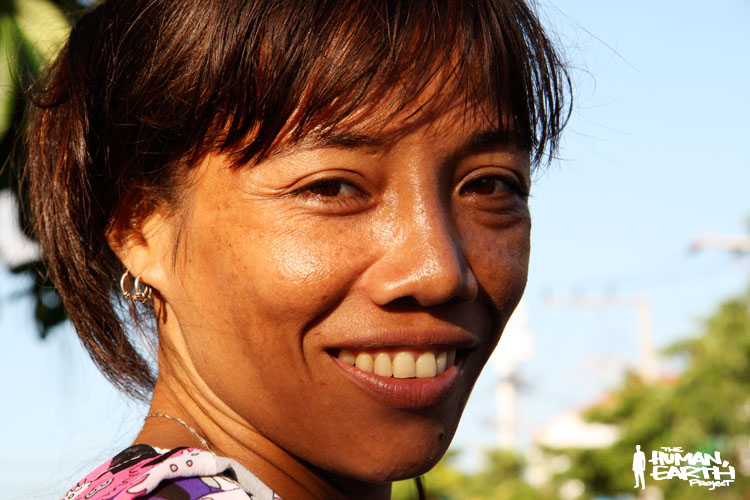 It’s been two long weeks since we’ve found any of our subjects, yet I could write volumes on all we’ve seen and done. Today I have a more personal story I’d like to share with you.

In the past decade I’ve been fortunate enough to live in seven foreign cities, towns and villages around the world. I’ve never returned to any of those places, until now.

This week I reconnected with several people I knew whilst living in Thailand between 2008 and 2010, including a 43-year-old local woman named Tan, who I came to think of almost as a second mother to me. Tan’s English is shaky at best, but if you take the time to understand her, you’ll discover an incredibly kind, gentle and generous human being. Tan cried several times as she recounted the story of her experiences over the intervening years, but there were smiles and laughter too. Her tiny, almost child-like body becomes very animated as she speaks, her thin arms flailing in the air.

A tailor from central Thailand, Tan spent several years working in the sweatshops of Bangkok. In 2008, Tan met Renee, a thirty-something professional boxer from Australia who was visiting Thailand for the first time.

Money gives us social power and, when we arrive in the developing world, we become more powerful than ever before. We can do things that are simply impossible at home and, if we arrive with a lot of money, as Renee did, that power may seem almost god-like, conferring the ability to dramatically reshape the lives of others. Only afterwards do we realise we’re neither as wise nor benevolent as we imagined ourselves to be.

Renee arrived in Thailand with the best of intentions. After meeting Tan, she wanted to give her a better life – a steady, well-paid job, and a comfortable place to live. She started a custom sportswear business in Phuket to produce boxing shorts and jackets for global export. Tan was the head tailor and local co-owner of the business, with her name on the company registration, the lease, and the accounts.

Renee stayed only a short time in Thailand before returning home, and I managed the nascent business for nine months in her absence. Tan and I sweated blood, working incredibly hard to build the business up from nothing, and our efforts paid off. The company was Tan’s life – she slept in a back room on premises and, with no friends or relatives nearby, spent almost every hour within its walls.

Tan is a tailor, not an accountant. She uses a calculator even for simple operations, and each time she writes figure on paper, she goes back and counts the digits with her finger to make sure they’re all there.

When Renee eventually returned to Thailand, she found the book-keeping had not been properly attended to, and a certain sum of money could not be accounted for. Tan couldn’t say where the money had gone. As she was the only other person with direct access to the account, Tan says Renee accused her of taking the money and using it to build a house in her village.

Tan says she was threatened first with a pay cut, and then with the police. She described how Renee dissolved the business, terminated the lease, and closed the joint bank account. Stung by the accusations, Tan offered no resistance, and says she received no pay for her final month’s work.

Everything was removed from the premises, Tan tells me – not only company assets, but her own personal belongings, including her clothes, laptop and few small items of furniture. She says the locks were changed, and she found herself out on the street. Incredibly hurt, her reputation destroyed by false accusations, and with nowhere else to go, Tan wept for days, and slept in a local temple.

Renee took another Thai co-owner, it seems, and restarted the same business under the same name a little further down the same street. Over the years it has grown, now boasting triple the floor space and double the number of employees. Tan still appears happy and smiling on the company website, which describes the company as founded on Renee’s “desire to help”.

Our key staff have improved their lives, prospects and self-esteem, the site boasts. You are buying a product that helps others as well as yourself. A tailor without tools, Tan spent a year working as a cook before meeting Phillipe, a 53-year old Frenchman who helped her start her own small sewing business. Business is slow, and she makes little money, but Tan says she’s happier now.

Perhaps this is the happy ending Tan deserves, or perhaps it’s merely the beginning of another chapter of heartache and foreign manipulation – only time will tell.

Marinho and I have been joined for the moment by my cousin Michelle, and are now in Bangkok, awaiting our visas for Burma (Myanmar). We’ve already covered a third of the expected 20,000 km (12,427 miles), and another wild month begins in the morning.