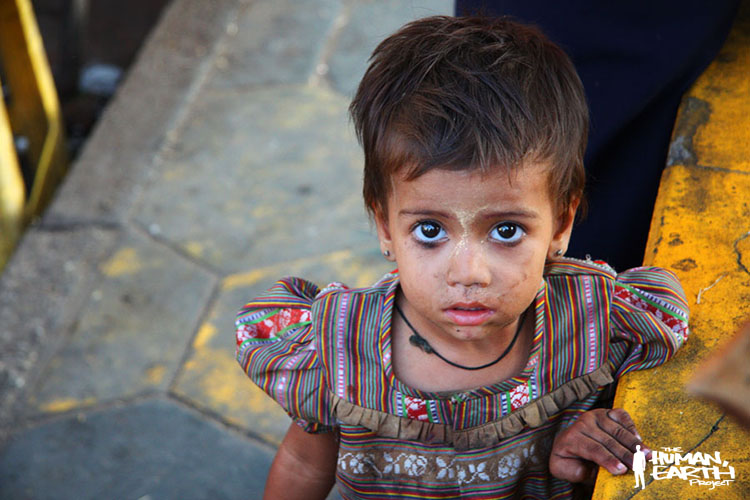 I’m writing this from Myanmar (formerly Burma), one of the poorest countries we’ll be visiting, and one that affects me deeply.

For the first time in decades, it’s possible for foreigners to reach the heart of Myanmar travelling overland from Bangkok, and that’s just what we’ve done. It was a journey of thirty-odd hours involving two overnight buses, plus seven hours aboard a small and severely overloaded pick-up truck containing twenty-one other human beings, all their baggage, two ducks, and a significant quantity of lumber and other cargo.

The broken, spine-shattering roads twisted through lush jungle and between serrated limestone peaks. Perched on the open tailgate, we were alternately roasted by the tropical sun, drenched by monsoonal rains, and bathed in dust. Much of our equipment was damaged by the heat, rain, sudden shocks and ceaseless vibrations. We’ve lost data, it seems, and the ability to edit our films. We came here to Yangon, a city of six million people, in search of a young beggar girl we never really expected to find.

Her name is Wada (‘Way-dah’). She was quickly identified as a Muslim by the string necklace she wears in the photograph. We went from mosque to mosque, before realising that females are not permitted within. Word of our passing spread through the Islamic quarter, strangers came to see her photograph, and at last the girl was found and brought to us.

Wada is the third of three children. The father she never knew left for Malaysia while she was still in the womb, supposedly to provide for his growing family, instead abandoning it altogether.

Those early years – when I first encountered Wada – must have been especially difficult for Wada’s mother, and she alone knows the sacrifices she’s made. As a lone woman struggling to feed four mouths in an impoverished land, she has succeeded admirably in raising three beautiful, bright children. They attend school by day, and accompany her by night to a busy street in the city centre where she unfolds a small table to sell tobacco and betel nut. I have often thought of The Human, Earth Project as a sort of treasure hunt, and we did indeed discover something precious here tonight. Playing with these children by the side of the road, with the traffic howling through the gathering gloom, Marinho and I put our cameras away. Documentaries, lost data, blog posts, status updates: all these things suddenly seemed very trivial, and very far away.

What we’d found instead was something infinitely more valuable – the warmth of humanity, laughing, squealing, running barefoot through the night.

Seven billion stories surround us; reach out and put your arms around one.