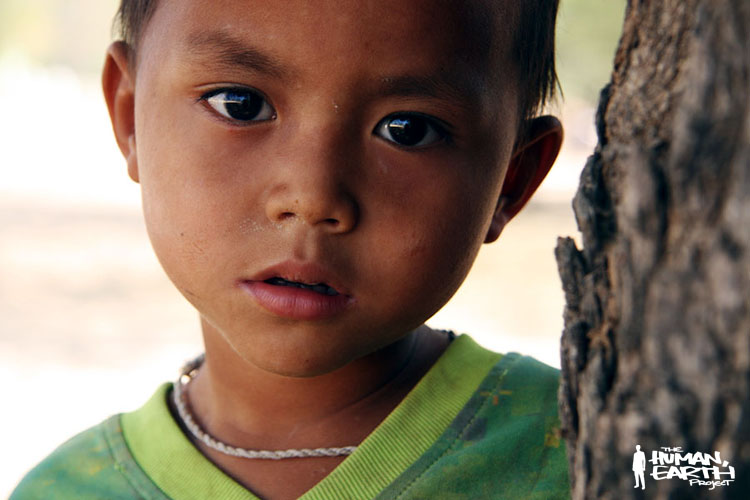 Almost five years ago, I played peek-a-boo around a tree with a young boy in a small rural village in central Myanmar.

His  name is That Py Soe, and he’s now eight years old. We found him at home with his mother, having taken the day off school after injuring himself at play. His father is a construction worker, and his mother works the land, growing peanuts, sesame and watermelon. That Py Soe lives in a rapidly changing world. Due to his village’s location on the fringe of a major historic site, with coachloads of foreign tourists shuttling in and out each day to see the temples, the villagers are turning increasingly to tourism as a source of easy income. Here, as in many places, the relationship between foreigners and locals is essentially one of greed.

We the foreigners come and blast away with our cameras, overstepping all bounds, getting as close as possible, taking all we can. We scatter our money in every direction trying to cram as much “experience” into as little time as possible. We take our photographs and experience nothing, forfeiting the opportunity to have any meaningful contact with the local people, or any deeper experience of the land in which they live. We romanticise these cultures as we destroy them, all for the praise and jealousy of family and friends back home.

Each of us likes to exclude ourselves from the equation, creating distinctions between “tourists” and “travellers”, distancing ourselves from the more ignorant and obscene. The truth is, we all affect these places by our presence, and rarely for the better. We encourage the greed of the local people, who come selling, begging, scamming. They see us as easy money, and we cease to see them at all. Each of us makes the experience a little worse for the next until, finally, we declare a place ruined, and go searching for other places to destroy.

The change is evident in That Py Soe’s village, as it is in countless places across Asia and the world. We were led to his home by a fifteen-year-old boy named Moe Moe who had also taken the day off school, claiming to be sick, though we found him hustling amongst the temples. Moe Moe doesn’t need an education or an honest job when he can stay in his village and find ways to take money from tourists. His parents may even encourage him to do so, if it means a little more money in the house.

Sadly, this is the kind of story that never ends.