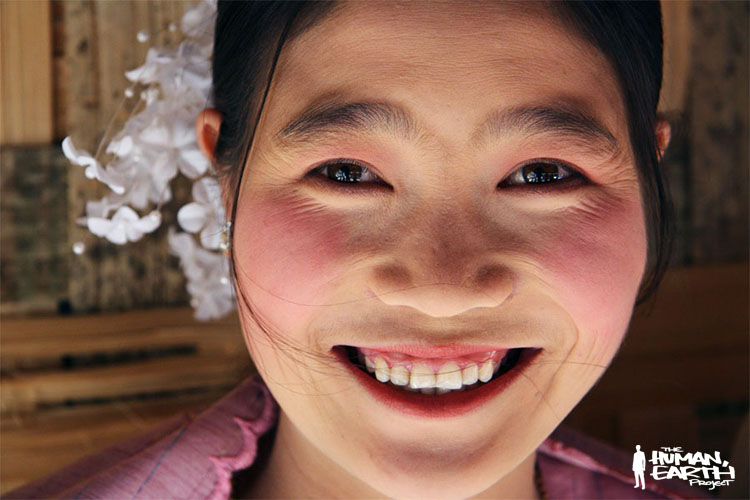 Almost five years ago, my brother and I passed through a small Danu minority village in Myanmar’s Shan State where preparations for a Buddhist wedding were taking place. The village had only two hundred inhabitants, yet a thousand people were expected to attend the wedding. They came streaming in from all directions, without a single camera to be seen amongst them. I volunteered to photograph the ceremony, taking the opportunity to capture portraits of the bride and groom and a number of the wedding guests. The bride and groom’s names are Yinn Ae and Moun, and they are now 25 and 23 years old, respectively. Theirs was a love marriage which has since produced a three-year-old daughter, Mi That.

Yinn Ae is a beautiful, intelligent young woman. Her stepfather is a local trekking guide, and for three years between school and marriage, Yinn Ae accompanied trekking groups as a cook. She now works at home while Moun treks and cooks, the only one of his family who no longer works the land. Though it is strange to be the odd one out, working for tourists is easier, and better paid.

At the wedding, I photographed a number of the guests, including Yinn Ae’s mother and three girls whom we discovered to be her relatives. Marinho and I spent a night in their home to better understand the family. Yinn Ae is the sixth of ten children, all but one of whom are female. Zin Moe is her fourteen-year-old sister, who attends high school thirty minutes’ walk from her village and dreams of someday being a doctor.

Zin Moe’s portrait was very nearly excluded from the final selection, but there was an unusual beauty in her face that appealed to me, and she is indeed becoming a beautiful young woman. Cho Cho appears in no less than four photographs from the original selection – more than any of my other subjects, and entirely unintentionally. I’d photographed her before dawn on the day of the wedding and again during the morning ceremony – after she’d washed and changed her clothes – without ever realising she was the same girl. I returned to the village expecting to find two separate children, only to find they were one and the same. Among the reasons I found Cho Cho such a photogenic subject are her large wet eyes which, as it turns out, water constantly as the result of a chronic condition. Cho Cho is a very intelligent, playful child, who popped up in the doorway to pull faces at us while we ate.

Cho Cho’s elder sister Kanteyji was not to be found in the village, having moved to a nearby city to continue her studies. Their grandmother – the mother of the bride – had also moved to a nearby town. Their story is yet to be continued…