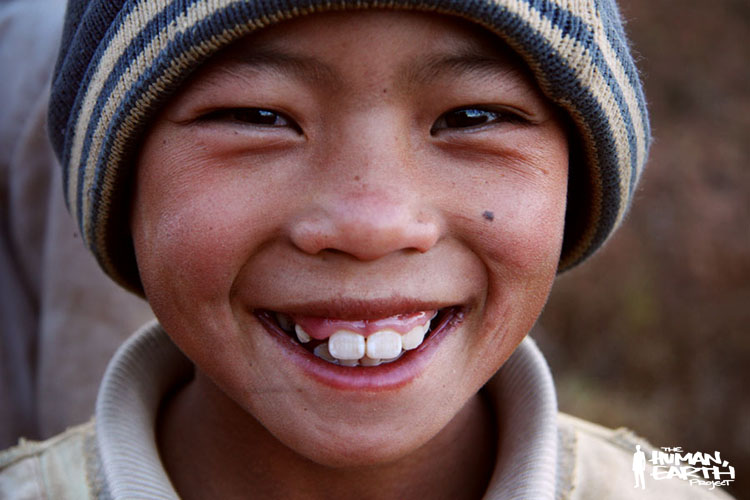 In the hills of Myanmar’s Shan State, Marinho and I continued the hunt for guests from a village wedding which took place almost five years earlier, and discovered an unexpected connection between another three of my subjects. Soe Nge is now fourteen years old and still attending school. By chance, I photographed two of his grandparents, one on each side of the family. In all honesty, I never expected to find both of them still living, and my predictions were sadly accurate: I was wrong only about which of the two had survived. Daw Ae was incredibly frail when I first photographed her. Born at the beginning of the First World War and having outlived both the English and Japanese occupations, she still soldiers on at the ripe old age of 95 – a startling age for an inhabitant of such a remote village, with poor sanitary conditions and no nearby medical facilities.

There are no other villagers even close to her age – the nearest is an eighty-year-old woman in a village nearby. Daw Ae has finished working only in the last five years since I last photographed her, and now spends her days warming herself in the sun outside her hut.

Daw Ae is a charming old lady with a ready laugh and toothless grin. When we asked her about the political and technological changes she’s seen in her lifetime, she shrugged them off as minor, peripheral things. The life she was born into – the rural village life – flows on around her, much as it always has. Sun Gye’s grandfather, Oo Khin, passed away two years ago at the age of seventy, and now lies buried in an unmarked grave several kilometres from the village where Marinho and I spoke with his family.

When I photographed him at the wedding almost five years ago, Oo Khin appeared in good health and good humour. He was, however, a regular smoker, and it finished him in the end.

I photographed Oo Khin with his forefingers and thumbs encircling his eyes – he had poor eyesight, his family told us, and he may have been asking me to buy him glasses, which were not available in the village.

For me, it was always a humorous photograph. It’s strange to see it now, knowing Oo Khin was asking for help, with the message lost between us interpreted five years too late.