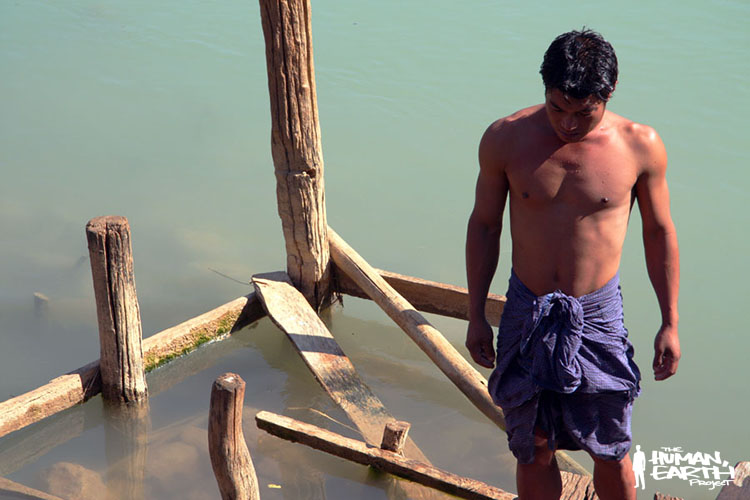 At the core of our epic search for subjects amongst the hills of Myanmar’s Shan State was a marathon trek through fourteen minority villages. The final four subjects of the trek had been photographed in a remote riverside village. By the time we began our search there, aching and exhausted on the morning of the sixth day, our group of six had been whittled down to two.

Three friends from Australia and the Netherlands had dropped away, taken by illness, fatigue or time constraints.

Our guide, as loveable and full of enthusiasm for the project as he was, gradually revealed himself to be an alcoholic utterly under the thumb of his elderly mother. On the fifth day she called him home, and off he went. Worse still, both of our camera battery chargers had failed midway through the trek, and the nearest place we could hope to replace them was hundreds of kilometres away in the wrong direction.

Whereas we’d generally use a full battery or more for each subject, Marinho and I now had less than one charged battery between us. We had no interpreter and only a few short hours to find, photograph and interview all four subjects.

Whichever way you looked at it, it could not be done. We missed a lot of great footage, and the lone battery ultimately failed towards the end of our final interview, but we did it. There was That Py Oo, unmarried and still living at with his family, who has a small food stand in the local market in the centre of town. There was the young mother Ma Thien Mya – who now carries another baby on her hip, and sells souvenirs to tourists outside the local temple – and Myat Tili Mg, the daughter with whom she was originally photographed. The most touching story, however, was Moe Moe’s. I had a number of photographs of the six-year-old Moe Moe having his head shaved in preparation to become a novice monk at the local monastery. Visible in several of the pictures, bathing in the river beside him, is his father, a boat driver who recently passed away from a prolonged stomach illness.

Moe Moe’s mother was a wonderfully kind woman who called Moe Moe in from flying his kite, and wept when I showed them both the pictures.

I asked Moe Moe what he wants to be when he finishes school.

A river boat driver, he said, just like his father.

And our final battery cut out.

PS. Because I’ve been backdating posts, it seems our automated mailing system hasn’t been sending them out. If you haven’t been receiving any posts over the past weeks, you’ve missed a lot. Catch up here!