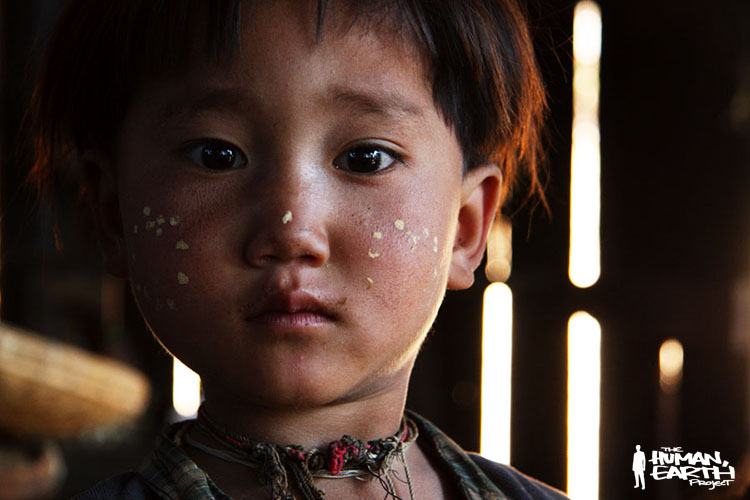 Each time that Marinho and I go searching for the people I photographed five years ago, it’s a race against time: I need to find and photograph them again before the light disappears. There are a number of times already we’ve cut it very close – we’ll spend the entire day searching for someone, and find them only as the sun is setting. (Aung San Oo, for example – the young man we chased to his army base and back). It was never so close as our search for three girls in a small Palong minority village in Shan State.

It was still morning when we arrived in the village, and we found the youngest of the three quickly and easily.  Ma Yin Yin Aye was an incredibly cute child, studying at a monastery school above the village. The other two girls, however, had long since finished their schooling. They were out harvesting tea somewhere in the surrounding hills, and nobody was able to tell us exactly where.

They’d each taken lunch with them, and wouldn’t return to the village until dark. And so we went in search of them, clambering up and down slippery little paths, calling from one hilltop to the next each time we spied a group of girls harvesting tea.

All the while, the sun was slipping down the sky. When at last the girls began to take their baskets of tea leaves and turn homewards, we abandoned our search and raced back to the village.

Our girls weren’t there. Having already located their homes, we hurried from one to the next in vain, then stood waiting in the gathering gloom.

It was the fourth time we’d come to the village to find these girls. If we missed them this time, we wouldn’t have time to come again. To complicate matters, the local we’d brought as a guide had other plans for the evening, and was anxious to get back to town.

I generally like to spend time with my subjects, to get to know them before I begin photographing them. This time, however, the portraits had to be taken first, or not at all, and I stood ready with my camera.

Darkness fell, and still the girls had not arrived. It seemed impossible to take a handheld photograph in what little light remained, let alone conduct a meaningful interview. We’d have to scratch them both off the list.

We gave the original portraits to their families, left the village, and were already on the path home when we met the girls, with their baskets on their backs. They were somewhat bemused at our excitement over finding them there. The girls were tired and hungry and ready to go home, and so were we. Those were two of the briefest interviews we’ve ever conducted, and then it was three hours home through the darkness to a meal and a bed.