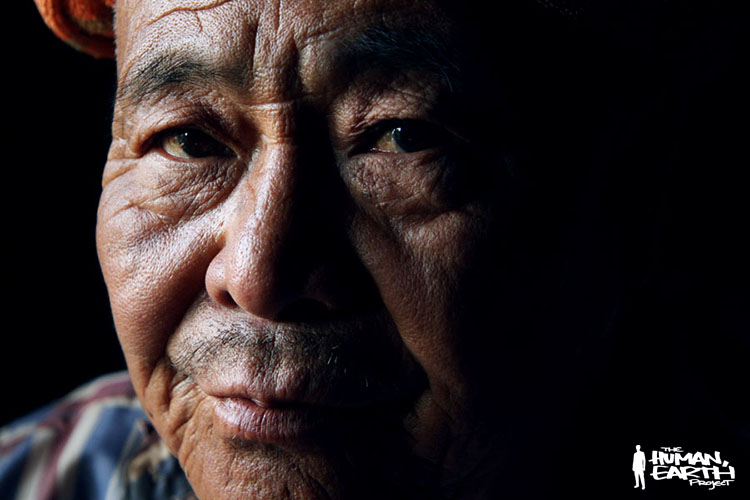 Nothing in that village made any sense at all – it was like a journey down the rabbit hole, or up the river to find Kurtz. We were searching for three people I’d photographed there almost five years earlier – an old man, and two of ten children that had been playing in his living room.

The old man we found easily, and he greeted us warmly. At the time, he had guests in his home, so we arranged to return half an hour later.

When we came back, however, he refused to even to open the door. He believed we’d come only to borrow his money to buy alcohol, and it took a great deal of persuasion and flattery to convince him otherwise. His name is U Hla Boor. Despite having been the village chief for a number of years, he professed no interest in politics, and simply smiled when Marinho pointed out the Nazi helmet hanging on his wall.

We showed him my photographs of the children that had been playing in his house. He looked them over carefully and denied knowing any of them, though we discovered (much later) that one was, in fact, his own grandson. Despite being a small, close-knit community, not a soul could name either of the children we were searching for, or even tell us if they were boys or girls. And so began an exhaustive – and exhausting – search, spanning three days and seven villages.

In one village, we were shown one boy who bore a very close resemblance to one of the children. After much debate, however, we decided he was not the one we were searching for. On our third day, on the point of abandoning the search, we returned in desperation for a third time to the village where the photographs were originally taken. This time, much to our surprise, one of our subjects was widely recognised.

His house was a forty-five minute walk uphill from the village, we were told, and a local man said he’d organise for us to be taken there. Our interpreter, seeing us in good hands and having business of his own to attend to, departed the village.

We then sat waiting in the local man’s house while he did precisely nothing, and when we reminded him of our search, he seemed to have forgotten all about it. We showed him the photographs again, and he simply sent us to the house next door.

The neighbours couldn’t understand our presence at their home any more than we could. In frustration, Marinho and I began walking in the direction indicated earlier. However, we soon reached the top of the hill, and there was only forest beyond.

I’d had more than enough of that mad little village, and was ready to abandon the search when a young monk led us back down the hill to the boy’s home – less than a minute’s walk from where we’d been kept waiting.

The hut was locked and empty. It was late afternoon, and we were told the boy and his family would soon return. Some said they were working in the fields, others said the forest. When night fell and there was still no sign of them, we arranged a meal and accommodation nearby.

After dinner, Marinho returned to the hut alone. He was welcomed by the boy’s family, met the boy, and explained we’d return to speak to him again at seven o’clock in the morning.

We were there at a quarter to seven the next day. The boy’s parents, who had been friendly the previous evening, were suddenly cold, even hostile. It soon became apparent that they’d sent the boy away deliberately, so that we would not be able to see him.

With the boy hidden and the parents against us, there was little more we could do. The other boy had never been recognised at all, so we scratched them both off our list and began the long trudge back out of the rabbit hole.