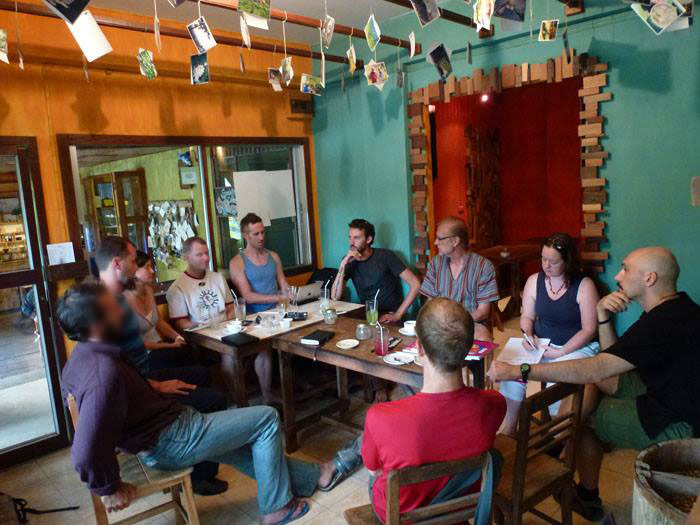 I have some big news for you all.

Marinho and I have just come from Chiang Mai in northern Thailand, where we met a brilliant group of men and women from all over the world who are very excited about The Human, Earth Project, and want to help us take it to the next level. On 26th December, we’ll be launching a crowdfunding project to raise the funds necessary to complete the production of our feature-length documentary film.

As part of the launch, Marinho and I will be releasing the very first glimpse of the footage we’ve been working on for the past three months. I can’t tell you how excited I am to finally share it with you all!

On 27th December, we’ve organised a social event in a gorgeous little venue in Chiang Mai, which will feature speeches by representatives of organisations working against human trafficking, and artists shedding light on the subject.

On 28th December, we’ll be leaving Thailand for Laos, to continue our search, while the crowdfunding campaign will run until late January.

Some of you were with The Human, Earth Project from the very beginning – was it only nine months ago!? – when I launched my first crowdfunding campaign. Others may already be familiar with such crowdfunding platforms as Indiegogo and Kickstarter.

It works like this: rather than approaching traditional funding bodies for finance, thereby incurring debt and losing creative control, in the case of crowdfunding the concept (The Human, Earth Project documentary) is floated to the public.

It’s you, the public, who judge the project on its merits, and decide whether it should be made reality. Rather than simply giving money, you’re given the opportunity to contribute in exchange for a piece of the project, whether it be a gorgeous photographic print, a film credit, or access to exclusive material.

More than that, you have the satisfaction of knowing that the project could not have happened without you.

I’m going to ask two things of you.

It’s free, and takes no time at all. You can do it right now; I’ll wait here.

Secondly, I’d like your help with the campaign. If you believe in what we’re doing, if you like our footage and are in a position to help us financially, then please do so. Even just a few dollars makes a big difference.

If you don’t have a few dollars to spare, you can still help by sharing the campaign on Facebook and Twitter, and encouraging others to join in.

The crowdfunding campaign – like the project itself – relies on momentum, and if we can all set it rolling on Boxing Day, there’s no telling how far it will go. This time last year, The Human, Earth Project was nothing more than an idea and a series of images on my laptop.

I wish you all a very merry Christmas and, if you’re in Thailand on the 27th, stop by and see us in Chiang Mai!