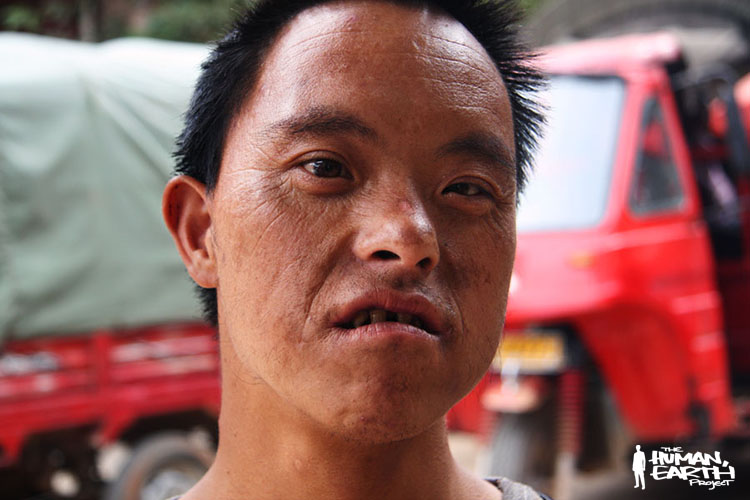 I would never have taken his portrait at all, but for his own insistence. Today I returned to find Yulu, and the elephant in the room.

Yulu is 36 years old, the eldest of seven children. He was born with skeletal problems, his father says. When he was young, due to poor agricultural techniques, his parents were both farming twelve hours a day. When Yulu fell ill with fever at the age or four or five, his parents lacked the time and money to care for him properly, and he suffers the effects to this day.

Ten years later, a local man returned from studying agriculture in the city, and instructed the village in improved farming techniques, which has eased the burden on Yulu’s family. Yulu himself now receives an annual pension from the government, which was increased last year from meagre 300 RMB (US$48) to 1,900 RMB (US$305). He can perform only the most basic of tasks, and will never marry. Though bruised and bloodied from a recent fall, none of my portrait subjects was ever more delighted at my return, or fascinated with my camera, than Yulu. What I’d apprehensively regarded as a potentially awkward interview was, ultimately, a true pleasure. A friend of mine from Venice Beach, California, once told me he’d like to travel the world and ask people from various cultures to define these three words: happiness, success, and love. Today, sitting with the 76-year-old Jiafa, I asked his thoughts on my friend’s three words.

Happiness, he said, was fishing, and pottering about in the garden.

Success? He had already succeeded in life, said Jiafa, and was now just waiting to die.

Jiafa had responded to the first two questions with great toothless grins. This time, however, he was silent.

Without a word, Jiafa rose from the bench and walked towards the house. His granddaughter found him in the bedroom with a photograph of his wife, who passed away five years ago. I’ve made contact with M today, after five days of silence. She’s made peace with her “husband”, who now says he’ll allow her to go home to her family in Vietnam – though only for a visit, and without her little girl.

M’s begun sewing clothes each day to earn a little money, in the hopes her “husband” will keep his word – it wouldn’t be the first time he’s baited her with false hopes. If we are able to find her, we can help her with the money and perhaps travel together with her.

In 2010, in Vietnam, I helped M set up her first email account. She now has her first smartphone, and I’m helping her access that account again. It won’t be long until she can contact the outside world directly.

It was a big day, and tomorrow promises more. If you haven’t already, sign up to receive all our news here.