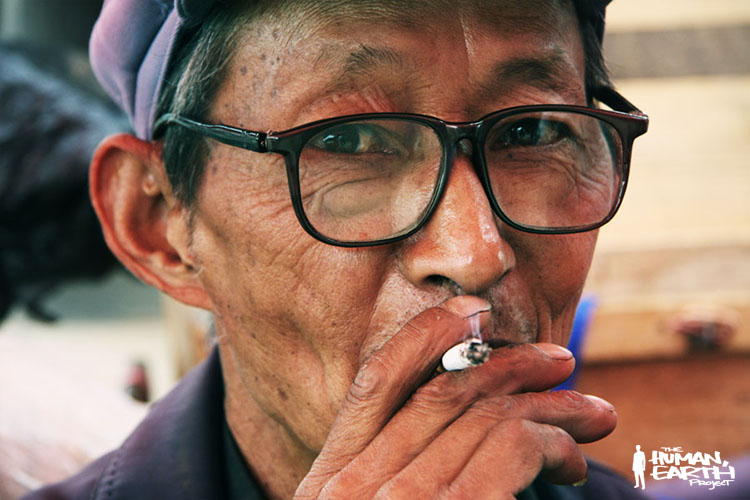 There is a beautiful little town in southern China whose Friday market draws people from many minority villages scattered across the surrounding valley and mountains. One Friday, four years ago, I roamed that market taking portraits of local people.

Today, Marinho and I came back to that market in search of no less than twelve people – our single broadest search on the entire journey. Many things had been rearranged – the animal market had been moved from the ridge to the river, and a large number of stalls had been relocated to create more parking space – but the market remained essentially the same.

In the beginning, it seemed easy. I spotted two of my portrait subjects on our first stroll along the town’s main street.  The first we interviewed today; the second we’ll meet again tomorrow. Bingkun, now 65 years old, hasn’t changed at all in the past four years. I recognised him immediately, from the opposite side of the street, wearing the same faded hat and the same thick glasses (which he removed for today’s portrait).

Bingkun runs a small stall mending shoes and umbrellas, as he has every Friday for years uncounted. The rest of the week he spends at home, taking care of his two grandchildren.

Although we didn’t find as many people as I’d hoped today, we collected a list of clues which we’ll follow to surrounding villages over the coming days. She’s a mute, they say, and sold both her children.

Another of our subjects is rumoured to have twelve fingers and twelve toes.

One of the most beautiful moments of my day was a chance meeting with Yulu, one of yesterday’s subjects, in the streets. Living in a village only ten minutes’ walk from the market, we found Yulu wandering alone, as he had been the first time I photographed him. He stood for a long moment with us in the middle of the street, grinning and gripping my hand as though he never wanted to let go.