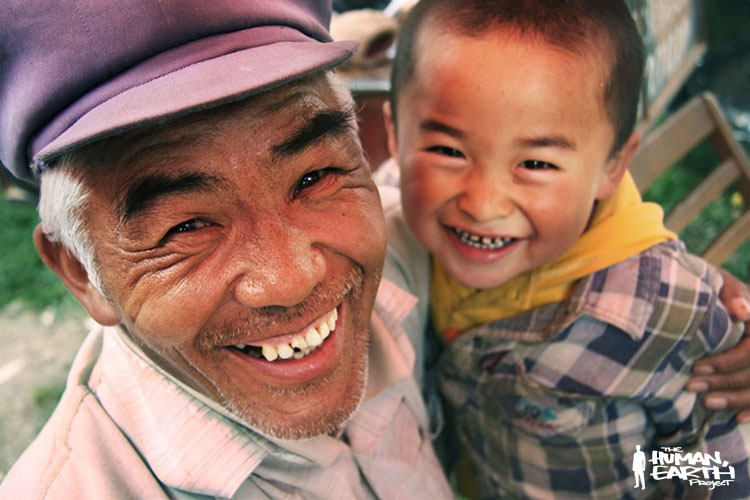 I found Zhong Ming at the town market, just where I’d found him four years earlier, and recognised him instantly.

Zhong Ming, however, recognised neither himself or his grandson Yu in the photograph I gave him. Surrounded by people saying yes, still he shook his head and looked doubtful. When the crowd finally won him over, he invited us to his home on the outskirts of town, where we enjoyed one of the best meals I’ve eaten in these past three weeks in China. Zhong Ming’s family have been living here for five hundred years, he says. Their business is zheng long – baskets held in cylinders of shaped wood, used for steaming rice and dumplings. A large zheng long can take three or four days to make, and sell for as much as 320 RMB (US$51).

The 66-year-old Zhong Ming is widely renowned for his work, with clients thousands of kilometres away in Beijing and Shanghai. He has over forty years’ experience, his son twenty, and little Yu, at seven years old, is already beginning to learn the tricks of the trade. Yu’s parents are divorced – an increasingly common phenomenon here – and his mother has never returned to visit him. He’s an intelligent child, always at the top of his class, says his father.

Will Yu continue the zheng long tradition? That remains to be seen.

In other news, I spoke to M again this evening. Her Chinese “husband” has indeed gone back on his word, now saying he won’t allow her to visit her family in Vietnam until next year at least, yet M continues working each day. She is still unable to access her email. We hope to arrange a meeting with her within two weeks.

There are momentous events just around the corner. If you haven’t already, sign up to receive all our news here.