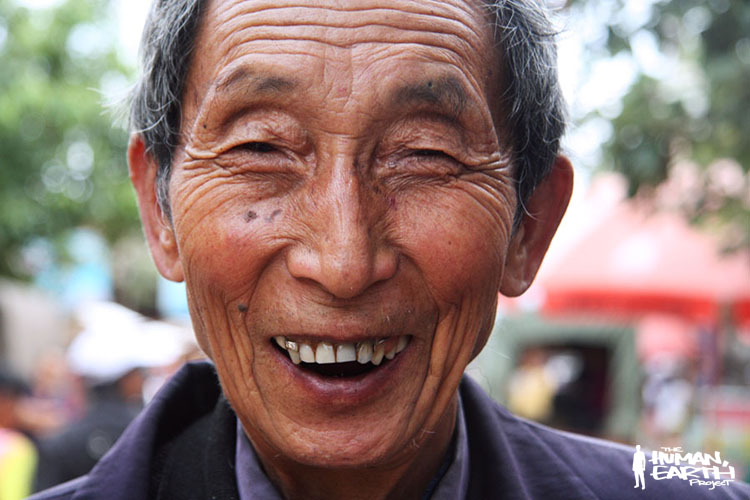 Our search for locals I’d photographed at a town market in southern China four years ago led Marinho and I out amongst the surrounding villages, and into the homes of three delightful grandfathers. At 82 years old, Shi Ying is the eldest and most spritely of the three. He’s a true jack-of-all-trades: a painter, calligrapher, carpenter, mason, multi-instrumentalist and feng shui master. The first time we called at his home, Shi Ying was away in the mountains, busy with the calligraphy and feng shui arrangements for a local man’s funeral.

I had many questions for Shi Ying. He had only one for me, and repeated it often, jabbing a long and bony finger at the portrait I’d given him: Where’s the top of my head? We required two interpreters to speak with Zhong Guo, including a very loud one, as he’s somewhat hard of hearing, and speaks little Mandarin.

Until two and a half years ago, Zhong Guo spent his weeks making bamboo dustpans which he’d carry to the Friday market to sell. Age has now caught up with him – he now walks slowly, with a stick in each hand, and never so far as the market. A father of four, he lives with his son and spends his days just as we found him – sitting by the entrance to his home, watching the world go by. Like Zhong Guo, Bao Xing is now 74 years old. We met him out strolling through the fields, still wearing the same battered cap and smoking the same pipe.

Bao Xing lives with his wife in a small house on a large plot of land above the village where he was born. The biggest change here has been the road, he says. The villagers no longer have to cross the valley on foot to bring their goods to market. Once a vegetable farmer, Bao Xing has since found a better return in his orchards of apple, pear and plum. His five sons are all farmers, married and living in the village. Will his grandchildren also work the land? What does he want them to be?

They can be whatever they want, so long as they take care of this land, says Bao Xing, gesturing with his pipe.

This is for you, Shi Ying…