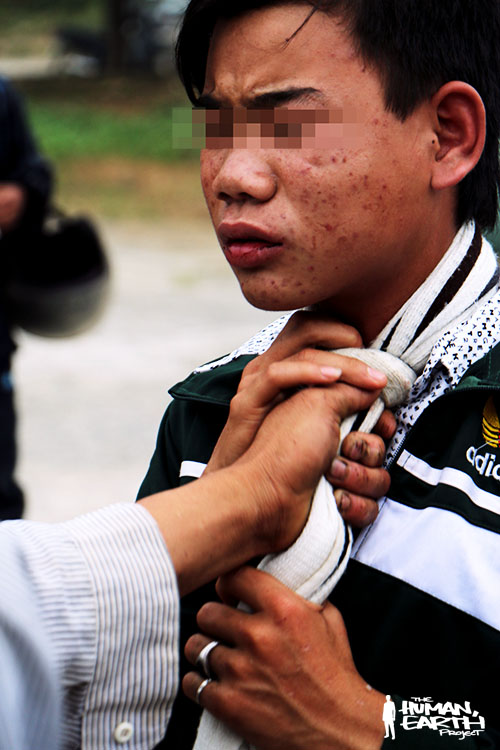 It can be difficult not to impose our own standards and values upon societies and cultures to which they simply do not apply.

This afternoon, P and I were at the home of a Hmong friend who had witnessed the theft of a neighbour’s motorcycle earlier in the day. As we sat talking over tea, my friend saw the young thief ride past on the stolen bike, and he and I immediately leapt on our own bikes to give chase.

The narrow, broken road snaked along the valley wall. In some places the surface had come away entirely. My friend knew the road, I followed his lead, and we quickly gained on the motorcycle thief.

As we approached the village, my friend was able to pull alongside the thief and manoeuvre him into the edge of the road while I came up behind him. We closed in the stolen bike with our own, then stepped down to deal with our quarry.

The thief was only a teen. He was unprepared to fight us both, and there was nowhere he could go. The slope rose steeply on one side of the road, and dropped away on the other. As he tried to edge away, my friend took hold of his scarf and twisted it tightly around his throat.

A number of passing villagers began to gather, and there was a brief interrogation. The thief was from another minority village 15 kilometres up the valley. The bike was confirmed to be the same one stolen, and calls were made.

Within minutes, the thief was standing at the centre of a circle of 17 men. The blood was still thrilling in my veins from our pursuit. I wasn’t sure what to expect, but wasn’t particularly surprised when the first fist landed on the side of his face.

Several of the men began punching and slapping the thief’s head, face, arms, chest and stomach, while others kicked at his legs. Never in my life have I witnessed such an intensely cold fury so close at hand.

With their weight of numbers and the knowledge that the thief would never dare strike back, there was no urgency to the villagers’ attack. It was a measured, clinical proceeding, like pulling the legs off a beetle.

Unable to defend himself against so many, the thief simply cringed as he fought to keep his balance, keep his breath, and hold back his tears.

The owner of the bike arrived, outraged, and launched his own fierce assault against the teen. With a mouth full of blood, the young thief pleaded for mercy. He twisted and turned in search of a way out, but there was none.

Twice he appealed to me, the foreigner, with his only word of English – hello – but my sympathies lay with the villagers. I did not feel their anger, but I understood it, and the only time I moved to intervene was when one of the villagers stooped to lift a large rock in his fist.

In this poverty-stricken valley there are few possessions more highly prized than a motorbike or a buffalo, and I’ve seen what hardships the villagers will endure to obtain these things lawfully. The locals here have no insurance, and little recourse to justice.

The villagers were clothed simply, their hands rough and dirty from their labours. The thief stood at their centre in a clean new shirt and jacket, silver rings gleaming on his fingers. This was precisely the kind of young man I’d heard described in endless variations by victims of trafficking.

In this male-dominated culture, a woman is merely another possession. If this boy would steal another man’s motorcycle, then why not someone’s daughter? The thief’s lips were swollen and lined with dried blood. He spat blood on the asphalt, and dribbled it on his scarf. His pants were scuffed with dirt from all the kicks he’d received, and his pockets had literally been turned out.

The money he carried – some fifty thousand dong (US$2.35) and an American dollar bill – had been counted out on the side of the road, and handed over to the motorcycle’s owner. A sheathed, straight-edged knife and an umbrella had been found beneath the seat of the bike.

I remember the words of M’s father, when I told him I wanted to help him persecute the men who had trafficked his daughter. He told me that when the time came, he could do that himself – in his own way. I began to understand what he had in mind.

In a crooked land where the authorities cannot be relied upon to deliver justice, who can stop a victim from his own crude vengeance?

Indeed, when the thief was marched forcibly to the local police station, it was found empty. By this time the crowd had grown to more than fifty villagers, including knots of women in traditional garb and gaggles of children in school uniforms.

Twenty-five minutes later, wearing a football jersey in place of a uniform, the police officer was the last to arrive.