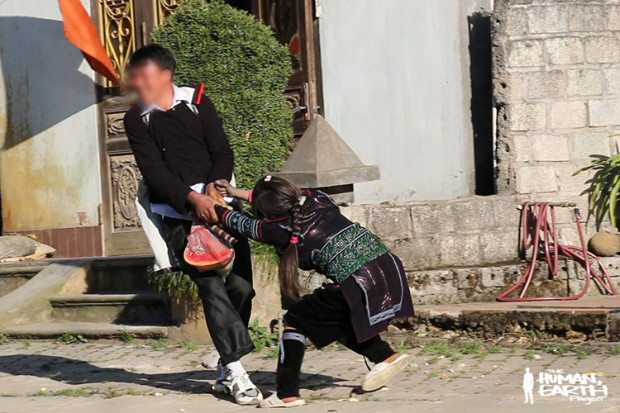 I’ve spent the past 3.5 years working on ‘Sisters For Sale’, our powerful feature documentary to raise awareness of the global human trafficking crisis.

‘Sisters For Sale’ focuses on some teenaged Hmong friends from Vietnam, who are amongst countless thousands of young women abducted and trafficked to China for sale as brides or prostitutes.

While young Hmong women are not the only ones at risk of being trafficked from Vietnam, there is one custom that places them in particular danger: the custom of marriage by abduction. Kidnapping is a part of Hmong culture. Any girl of marriageable age is vulnerable – and, in Hmong culture, a girl can be married as young as 12 or 13.

If a young man sees a girl he likes, and knows she is unmarried, he can simply take her from the street.

With the help of his family and friends, by foot or motorbike, he’ll take the girl back to his family home – and she will stay there, whether she wants to or not.

At some point in the next three or four days, the young man’s family will notify the girl’s family, and begin negotiations for the marriage.

The bride’s parents will be paid with money, meat and alcohol for their daughter, who then passes into the possession of her husband.

In theory, the girl has a choice in the marriage. In practice, this is often not the case, with her own desires subservient to those of the two families.

Like footbinding in China or bullfighting in Spain, the tradition of marriage by abduction is a destructive one, causing harm not only to those directly involved, but to Hmong society as a whole.

Sometimes the girl knows her abductor, has a relationship with him, and is willing to marry him – even so, for the sake of her honour as a respectable young woman, she will struggle during the abduction.

This makes it very difficult for an observer to understand if a victim’s struggles are real or simulated. It can be very hard to know whether a girl is being taken willingly or if she is being taken against her will, as is often the case.

Even if the girl is willing to marry her abductor, the abduction itself is an act of shocking force which can be painful and degrading for the girl. Her fear may be real, even if her struggle is not.

In theory, during her time as a captive in her abductor’s home, the girl is under the protection of one of his female relatives – his mother, perhaps, or a sister.

In practice, the custom of marriage by abduction can go tragically wrong, resulting in rape or suicide – or facilitating the trafficking of vulnerable young women.

A missing girl’s parents will often believe she has been abducted for marriage, when in fact she has been trafficked for sale as a bride or prostitute.

During those crucial first hours, rather than contact the authorities and begin the search for their daughter, they will simply stay at home and wait for news of her.

Several days can pass before the girl’s parents realise their mistake, by which time it is already too late – they have no way of finding their daughter, and may never see her again.

Not all Vietnamese Hmong marriages involve kidnapping, however.

If the couple are already in a relationship, the young man can approach the girl’s father for permission to marry his daughter.

The ones who take advantage of the custom of marriage by abduction are often the less desirable men, who may be unable to marry any other way.

I’ve visited Hmong villages in Laos where the custom was recognised as a destructive one, and successfully banned by the village elders.

The Hmong communities I’ve visited in Vietnam have not even begun to address the issue – in fact, as a long-held tradition, they seem to consider it beyond question.

To develop and grow in an ever-changing world – as individuals, as societies, and as a race – it is vital to question our habits and customs, and eliminate those which are harming us and our loved ones.

‘Sisters For Sale’ aims to spark this discussion within the Hmong communities, for the sake of their own sisters and daughters.

You can see the real-life abduction of a young Hmong woman in ‘Sisters For Sale’, and I’ll be taking a closer look at it here on my blog next week.

Subscribe here to learn more about ‘Sisters For Sale’ and the custom of marriage by abduction.

We’ve raised $6,374 in the first week of our fundraising campaign to save ‘Sisters For Sale’.

It’s a great start, but there’s still a long way to go – to help end a human trafficking crisis, get a sneak peek at ‘Sisters For Sale’ for only $1, help yourself to some great rewards and win the experience of a lifetime a breathtakingly beautiful corner of northern Vietnam, go to www.sistersforsale.com now!

The ‘Sisters For Sale; trailer is now available in four languages – English, Spanish, French and German.

I’d like to thank all of you who have contributed to save ‘Sisters For Sale’ this week: