Anatomy of an abduction 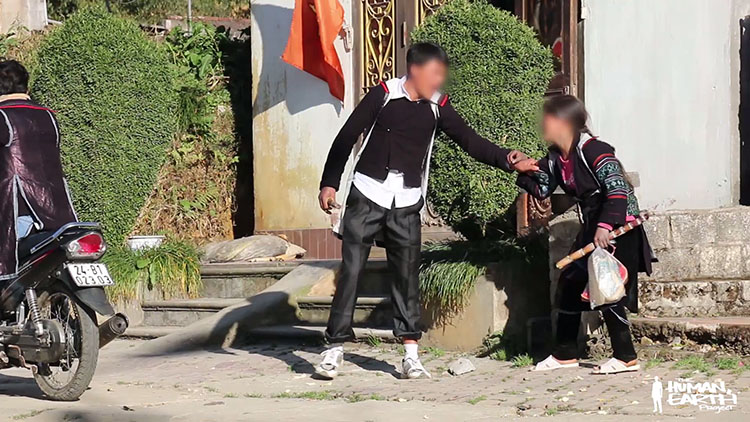 Last week I wrote about the Hmong custom of marriage by abduction, which features in our forthcoming feature documentary, ‘Sisters For Sale’.

Marriage by abduction is a violent tradition which permits a Hmong man to kidnap a girl or young woman of his desire from the street, and imprison her in his home.

At worst, it is a violation of a victim’s most basic human rights, which can lead to rape or suicide, and facilitate human trafficking.

Complicating the issue is the fact that a victim is sometimes taken willingly, and struggles only for the sake of her honour.

This can make it very difficult for an observer to understand exactly what they’re seeing – is the abduction real, or is it merely an elaborate act?

‘Sisters For Sale’ features a real abduction filmed in broad daylight near the centre of Sapa, in northern Vietnam.

In the footage, a lot of things happen very quickly, and on first view you might not see everything, or realise just what you’re seeing.

Having seen the footage countless times, I have a much better idea of what’s happening, and will explain it here as best I can.

The abduction takes place during the local New Year celebrations. This is a lunar event in late winter, with the date changing each year.

It is a very social time, with plenty of opportunities for young people to meet outdoors. For Hmong girls, it can also be a very dangerous time.

For Hmong men, it is an ideal time to abduct a girl. In this case, the victim is a teenaged girl, perhaps only 15 years old. Her abductor seems several years older, perhaps 19.

Both are wearing traditional Hmong clothing. The victim carries sugarcane, and plastic shopping bags with watermelon and shoes.

She’s trying to leave the centre of Sapa by one of the main roads. It is a busy street, with a lot of people walking, riding and driving past.

Her abductor has blocked her way, refusing to let her pass. Several times, he pushes her back.

He looks at his phone, and calls to a friend across the street. He’s waiting for his friends to arrive, to help him kidnap the girl.

A motorbike pulls up beside them, driven by a second young man.

The first man grabs his victim’s jacket, but she pulls away. He grabs her by the wrist, and pulls her towards the motorbike.

She resists, stumbling and almost falling as she tries to pull away. The victim struggles fiercely against four young men, who are trying to lift her onto the back of the first motorbike. They grab her roughly by the arms, and one ankle.

When we glimpse the victim’s face, she seems to be in pain. Her sugarcane and shopping fall to the ground. She loses a shoe.

The four young men show no regard for her physical wellbeing. After several violent attempts, they succeed in shoving their victim into a sidesaddle position on the back of the motorbike. One grabs her buttock. It looks painful, and degrading. A seventh young man enters from the left hand side. He draws attention to two young women who are approaching from the right side, trying to reach their friend.

What happens next seems odd. The two young women seem to simply turn around and run back the way they came.

Closer examination of the footage shows one of the young men crouching down with his head between the two girls’ stomachs and his arms around their waists, driving them forcibly away. Moments later, the two girls hurl themselves back again – first one, and then the other – in a desperate attempt to reach their friend. They are repelled by a wall of three young men, who shove them back. Meanwhile, the abductor and one of his friends have forced the victim into a straddling position on the back of the motorbike.

She continues to struggle violently, using the driver as leverage to throw her weight backwards, to no avail. One of her friends makes a final, failed attempt to reach her.

The abductor climbs on to the motorbike behind the girl, boxing her in with his arms, and urging the driver to leave. The motorbike leaves, the victim still struggling, followed closely by the two young men on the second motorbike. The entire struggle – from the moment that the abductor first grabs his victim’s jacket, to the moment she is taken away on the motorbike – takes only sixty seconds.

What shocks me most is not the speed and violence of the abduction. Nor is it the grins and laughter of her abductors, who clearly enjoy manhandling this defenceless girl.

What shocks me most is how commonplace it all seems. In the space of those sixty seconds, eleven motorbikes, one car and several pedestrians pass by.

The only ones who stop are two young men who stop to enjoy the spectacle. One stands at arm’s length, chewing sugarcane, in the same way that you or I might munch popcorn while watching TV.

But how can anyone intervene – including my cameraman, who shot the footage – when they don’t really know what’s happening?

There’s no doubt that the girl’s fear and pain are very real. Her struggle also seems very real – but may not be.

Despite the violence of the struggle, it’s quite possible that the victim is in fact going willingly with her abductor.

Perhaps he’s a boyfriend, of whom her father would not approve and would not allow to marry.

To elope with him would be to risk the stigma of being branded a “bad girl” by her community. In traditional Hmong culture, merely having a boyfriend is bad enough.

As a young woman in a heavily male-dominated society, perhaps this pain and humiliation is the price she must pay to marry the man she wants without destroying her reputation.

To keep the respect of her community, she must suffer at their hands.

In my own opinion, that alone would be sufficient reason to call an end to this brutal custom – but that’s not the worst of it.

For many Hmong girls, this is a constant fear, which could become reality at any time.

Not only can these abductions lead to rape and suicide, they also help facilitate the trafficking of women into brothels, where they can be raped up to 40 times each day.

Other women are trafficked and sold into forced marriages with foreign strangers.

Traditionally, in the days that follow an abduction, the abductor’s family will begin negotiating a bride price with the victim’s family, hoping to purchase her with money, meat and alcohol.

That’s what I’ll be exploring here on my blog next week – subscribe here to learn more.

In the meantime, you can see the abduction for yourself, and make up your own mind.

It’s part of a special sneak peek at ‘Sisters For Sale’, which is available here for a very limited time – for only $1.

That’s just one of the opportunities you’re missing out on if you haven’t yet checked out our fundraising campaign to finish ‘Sisters For Sale’ – including the opportunity to win the experience of a lifetime amongst the Hmong people of northern Vietnam.

I’d like to thank everyone who has done their part against the global human trafficking crisis:

Watch the ‘Sisters For Sale’ trailer in English, Spanish, French and German.