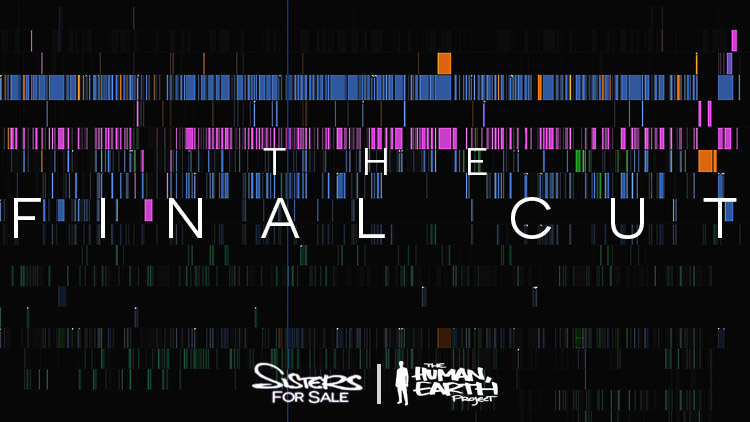 Many things in life are a lot more complicated and time-consuming than originally anticipated. Recording the narration for our feature documentary, ‘Sisters For Sale’, was no exception.

When I first began scripting the film, I tried to distance myself from the story, to tell it from a more objective point of view. It’s a story about women, and I wanted a female narrator for the documentary.

I soon realised, however, that my own story was an integral part of the greater story, and the most powerful way to tell that story to a Western audience was in my own words – so it’s my voice that will guide the audience through the film.

But I’m no Morgan Freeman, and there’s a lot more to narrating a film than simply talking.

I’ve been told that my own passion for this story is one of its greatest assets – but while that enthusiasm may be an asset in real life, it doesn’t necessarily work in a film. Last month, for the first time in six years, I had a chance to catch up with Rami and Ivana Shaafi – two wonderful human beings who have been huge supporters of ‘The Human, Earth Project’ from its very beginning.

You will all have heard Rami’s impressive vocal work on the ‘Sisters For Sale’ trailer. Apart from Rami being an extremely talented overtone singer, Rami and Ivana play an incredible array of native instruments from around the world – strings, wind, percussion, you name it.

The endless encouragement and unwavering support I’ve received from Rami and Ivana have meant a great deal to me over the past few years, as they’ve followed my story through good times and bad. Rami and Ivana introduced me to Roman Plačintár, who records Rami’s albums. Roman was great to work with, and we spent two sessions at his studio in Bratislava, recording the narration for ‘Sisters For Sale’.

Everything was fantastic, except my voice.

It’s a little-known fact, but one of the many bizarre experiences I’ve had as a traveller was a brief stint as a catwalk model in Mumbai. Never in my adult life had I concentrated so hard on something so seemingly simple as the act of walking.

By taking conscious control of an otherwise unconscious action, it suddenly became incredibly complicated, and gave me a new appreciation of all the things our minds do without our even realising.

In the same way, when you begin to focus on the speed and tone of your voice, your enunciation and emphasis, all those little muscles that play a part in shaping each word, and the effect of your breathing and posture, suddenly talking isn’t so simple anymore.

My narration from the Bratislava sessions just didn’t fit the film.

Having left the Schengen for visa reasons, I spent two more sessions recording with Danilo Crnogorac in a Serbian city with a long and unpronounceable name (Kragujevac – though it doesn’t actually sound anything like that).

After a marathon final session which yielded almost 3.5 hours of recordings, we got it.

Danilo and I recorded over half an hour of audio for just the final 5 minutes of the film, when the various threads of the film are all tied up.

As Danilo said, noting my progress, “You taught yourself how to talk”. I believe it was a compliment.

Then, of course, came long days of sorting through all that audio, selecting the best clips and trimming them down to fit into the film. Unfortunately we didn’t have the technology to tone down the strange international accent I’ve picked up after years of living abroad. With the narration in place, I now have a final edit of ‘Sisters For Sale’.

All the way back in June, I said the film was getting “very close” to the final cut, and just needed a few tweaks. Since then, I’ve gouged a full half-hour from ‘Sisters For Sale’, taking it from 122 minutes to just 92.

Thirty meticulously-crafted minutes have been torn out and left on the cutting-room floor – including a lot of beautiful footage, and animations I’d spent weeks preparing – and ‘Sisters For Sale’ is looking leaner and meaner than ever.

Everything is in place now but the music, some final animations, a final sound mix and the end credits.

The past month has been insanely busy, and there’s been a lot more happening than I’ve had time to share here on the blog. I’ll be playing catch-up, and introducing you to more of the team, when things start to quieten down.

I’d like to thank Judith Cooper for her recent support, it’s much appreciated!