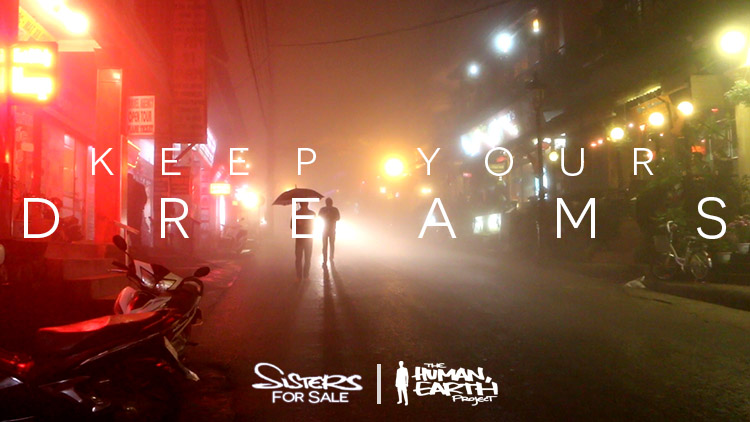 I first launched ‘The Human, Earth Project’ after learning of the abduction of my young Hmong friend, M.

The impossible dream behind the project was to get M home.

M was taken from her home in northern Vietnam in July 2011, and presumed trafficked into China.

In May 2014, I succeeded in locating and meeting with M in a distant region of China. It was the first time since her abduction that M had seen anyone she’d known from Vietnam.

For the first time, M had an opportunity to go home, and was desperate to do so – but her decision was not an easy one.

M had been forced into marriage with a local man, and had given birth in China. If M went home, what would happen with her baby girl?

M spent a year agonising over her decision, ultimately deciding to remain in China for the sake of her child.

At one point, M’s husband even let her travel 3,000 km south to the visit her family in Vietnam – only to call her back north before she’d even crossed the border.

In 2015, ‘The Human, Earth Project’ came under attack by a Vietnamese-based organisation which spread vicious rumours about me and my anti-trafficking work.

This organisation succeeded in destroying many of my friendships in Vietnam – the very friendships which had inspired my work.

After several months, it seemed that these rumours had reached M in China, who suddenly seemed less trusting of me and my motives.

After having given all I could to help M for years, this was very difficult for me, and I considered shutting down ‘The Human, Earth Project’ altogether.

M no longer needed me to check in on her – she’d made her decision to remain in China, and I’d long since put her in touch with other friends she could speak to.

If there was no longer any friendship between us, and nothing more I could do to help her, there was no reason for me to keep calling.

I began calling M less and less often – until finally, I stopped calling altogether. I had her contact via social media. I could see that she was alive and well, and that was enough.

Then this year – for several weeks, and then months – I didn’t see anything new from M on social media. I told myself I should call her – and kept finding excuses to delay that call.

Last week, someone tried video-calling me via Facebook. It was a Hmong name I didn’t recognise, and I rejected the call.

When I checked the profile picture, I realised it was M – she’d changed the name of her account. I called her back immediately.

It was the first time we’d spoken in a long time. M looked well – in fact, she looked really happy.

In the background, I expected to see the walls of M’s home in China. Instead, I saw a simple wooden hut – a hut I recognised.

It was M’s family home, in Vietnam.

For the first time in 6 years and 4 months, M was home.

This was the impossible dream I’d spent years waiting for and working towards. I’d lost all hope of ever seeing it – then suddenly, here it was, made real. It was a surreal moment, to say the least.

M and I spoke for half an hour – we had plenty to catch up on.

M’s little girl was still in China, with her husband. Amazingly, he’d given M permission to visit her family in Vietnam for three months, until the Hmong new year in mid-February.

M wanted to see me again. I told her I could come and see her while she was there in Vietnam. I said the documentary was almost finished, and I could show it to her there. She was excited.

As soon as I hung up, I cancelled all my plans, and began searching for flights to Vietnam. I hadn’t been back since January 2015, and hadn’t expected to return. Now everything had changed.

I tried to call M again, two days later, and couldn’t get through. I spoke to her again on the third day, just before I booked my flight.

M’s husband had changed his mind, and called her back to China. He’d already booked a ticket for her, in two days’ time. She had no choice, she said.

She could escape China, but she couldn’t escape her culture.

Maybe next year, she said.