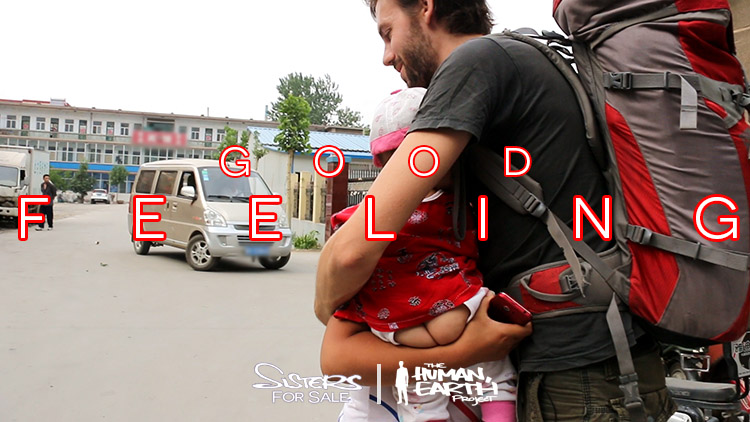 Two months ago, I was taking a city bus through an area that had been hit hard by the economic crises of the past decade.

There was an old man in the centre section of the bus, near the back doors. Instead of a walker, he had a little old wooden table on wheels to steady him as he walked.

When the old man’s stop came, I helped carry the table off the bus for him. He was happy, and I was happy to have helped in some small way.

I came back into the bus, and noticed a small bag sitting where the table had been. There was nobody else near it, and I assumed it belonged to the old man.

I picked it up and made a quick dash for the closing doors, calling after the old man.

A stocky young man leapt out of his seat in the back of the bus and came charging towards me, furious. He thought I was trying to steal his bag, and looked about ready to murder me.

(I later realised he was an umbrella salesman on a sunny day forecast rain, and probably wasn’t in the greatest mood to begin with.)

Before I knew what was happening, the man was up in my face, yelling, fists clenched. The good feeling I’d had dissolved instantly in a spike of adrenaline.

That was the feeling that stayed with me afterwards – that sudden confusion at finding myself under attack, of being at the centre of a senseless conflict, preparing to defend myself.

It was a moment that struck a chord with me: that feeling was only too familiar.

‘The Human, Earth Project’ began with the desire to do some good in the world. I’ve stayed true to that goal, have worked hard towards it for almost five years – and, in doing so, have found myself the target of more hatred than I’d ever felt in my life.

In 2014, I achieved far more with this work than I’d ever hoped for – and it felt good, to have created something, to watch it grow, to see it making a difference in the world. It really seemed like anything was possible.

Then, in early 2015, I found my work shot down – stupidly, senselessly, by those who had mistaken my intentions, or simply didn’t care. The project went into a tailspin for almost two years. Progress was slow and difficult, and I was running out of reasons to push on.

With my life and work so closely entangled, it became a personal struggle as well as a professional one. Even the monumental success of last year’s fundraising campaign was overshadowed by backstage dramas.

It was a strange, confusing time. I’ve never been perfect, but I’d done my best, with the best of intentions, and I wasn’t prepared for the animosity.

There might have been a hundred compliments for every piece of abuse – but it was the abuse that stuck, and always seemed to tip the scales somehow.

2017 is the year ‘The Human, Earth Project’ has begun to rise – slowly, hopefully – once more.

I’ve neglected social media, and have done very little promotion – yet people have been coming forward from all over the world, to show their appreciation and lend a hand. This year, the project has brought some amazing people together, and I’ve been thankful for all of you.

I had a conversation recently with someone who was surprised to have been included in the credits for ‘Sisters For Sale’.

It was natural to help out, he said, and he’d only done a small thing – but this is a small project, and sometimes those small things can make a big difference. While he found it natural to help, there are many people who might not have bothered at all.

I want to use what voice I have to recognise those people – good people – who may not otherwise get much appreciation for the things they do in life.

When I scan the credits list, those are the names I see – hundreds upon hundreds of you. Butterflies unaware of the tornadoes you set in motion with every beat of your wings.