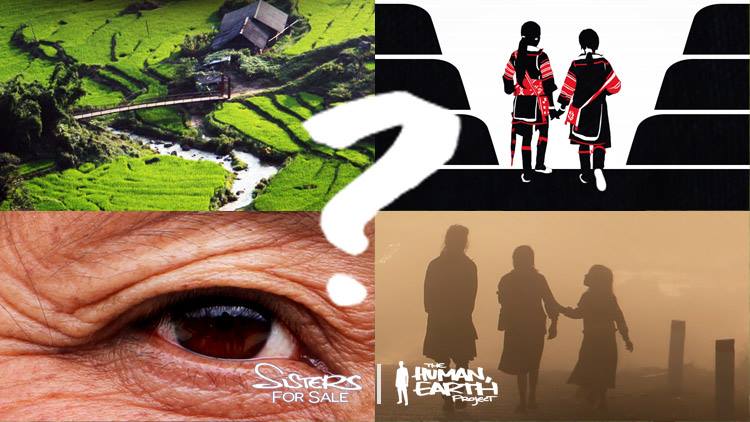 Today I have a little surprise, a special prize, and a question for you.

Over the past nine months, I’ve shared two very different poster designs for our feature documentary, ‘Sisters For Sale’.

The first – the cinematic poster – shows a desperate yet defiant young Hmong woman separated from her home.

I had an amazing response when I first shared the poster here and on Imgur, where it quickly became one of their Most Viral posts.

The first ever print was received by Kerstin Raitl in recognition of her amazing support and friendship last year. “Thank you sooooo much for the poster, it’s amazing, I love it!!!” wrote Kerstin.

The second – the classic poster – is a deceptively simple design representing the concept of womanhood, in the traditional colours of the Black Hmong.

This design also received a wonderful response, and also hit the front page of Imgur.

Leonie Brok won last month’s competition to decipher the meaning of the poster, and has now received the very first print. “Omg I’m so happy… It’s such amazing quality, and has a nice solid feel to it,” wrote Leonie. “I’m going to get it put in a proper frame with glass to protect it. My mom said it was a silly thing to do, but then I showed it to her and she was amazed by it too.” But there was a unexpected problem.

Over 36,000 people have now watched the ‘Sisters For Sale’ trailers.

Numerous people have also seen the documentary itself – some of them are co-workers and supporters whose talents and feedback have been crucial to finishing the film, and others are selection judges at film festivals.

From the people who have witnessed my journey over the past five years, with all its successes and setbacks, the response has been wonderful. I’ve received comments like this one:

“OMG! Absolutely amazing story & stunning visually. I cried, I smiled and I screamed at the screen – “Don’t get in the van!” – incredible story.”

From those who are unfamiliar with my work, however, praise has been tempered with skepticism. Some don’t believe the events of the film are real, or even possible. Some have mistaken the documentary for a fictional film, or a “mockumentary”.

That was a response I’d never anticipated, and I’ve recently been taking a closer look at the film and trailer to see what adjustments can be made.

The first, cinematic poster, which was intended as the primary poster design for the film, employs a photo-collage style typically associated with fictional films: a large well-lit face, a sweeping landscape, and tiny figures in between.

While the response has been amazing, for some people the design has also deepened the confusion: is this a documentary, or a fictional film?

I love the second, classic poster – but it was only ever intended as an artistic alternative, rather than a primary poster, and says little about the film it represents.

And so I needed a third design, which would more accurately depict ‘Sisters For Sale’ as the documentary it is.

The new “mother’s love” design is the simplest yet – and has already become the most controversial.

It has been the subject of a eight-week discussion about whether it should be revealed publicly at all. The woman in the picture is Bao. She’s holding a photograph of her trafficked daughter Pang (blurred in this image). Both Pang and Bao play key roles in ‘Sisters For Sale’.

I became friends with Pang in 2010, and she was kidnapped several months later. When this photograph was taken, Bao hadn’t seen her daughter in over three years.

So where’s the controversy?

Those who had seen the poster were sharply divided as to which expression Bao has on her face.

Despite all the hardship she has known, Bao is one of the sweetest human beings I’ve ever met – kind, smiling, constantly concerned for the comfort and happiness of others.

In this photograph, I see a grimace of extreme anguish, which she attempts and fails to mask with a camera-conscious smile.

Many others, however, have disagreed. We even conducted a poll, and 61% of people said she looked “happy”, rather than “sad”.

I asked my own mother, Susan, for her opinion. She stared at the picture for two or three minutes, and went through a dozen facial expressions of her own, while she considered her answer.

‘There’s a smile, but there are other things as well,’ Susan said. She sensed pride, fear, sadness, resignation and concern.

‘A mother is always worried,’ she concluded.

As the controversy over the “mother’s love” poster grew, I realised we might need yet another design to highlight the documentary aspect of ‘Sisters For Sale’.

And so I created the “sunset glow” design, the purest and perhaps the most beautiful of them all. It depicts an elderly woman walking with two Hmong girls through the mountains outside Sapa, as the sun illuminates the region’s characteristic fog.

It’s one of my favourite images from the documentary – even so, I found myself drawn back to the “mother’s love” design, which I find more engaging, more powerful, and more relevant to the film.

I’ve come to love its ambiguity, and the fact that it means different things to different people.

Now I’d like to ask you a question: which would you choose as the primary poster for the documentary – the cinematic, the classic, the “mother’s love”, or the “sunset glow” design?

I’d love to hear your thoughts at thehumanearthproject@gmail.com. Today I have another little competition for you – and this one’s for the music-lovers out there.

The prize is – you guessed it! – the very first print of the “mother’s love” or the “sunset glow” poster (it’s your choice!).

Anyone is eligible to enter (excluding my own blood relatives), wherever you are in the world.

I’ve referenced everyone from the Beach Boys to Nirvana, from David Bowie to the Chemical Brothers.

There are three bands I’ve referenced three times each: what are they, and what are the names of the blog posts?

Two of those bands are absolutely huge – I know that you know them.

…And the third band? Well, let’s find out!

If you can’t get them all, send me as many as you can. Whoever sends me the most complete answer by Saturday 5th May will receive the very first print of their chosen poster.

While there is space for ambiguity and might be multiple potentially-correct answers, there’s only one correct answer, and I have it written down right here.

If I receive more than one correct response, I’ll give you a deciding question.

Send me your answers at thehumanearthproject@gmail.com.

There are some very exciting things happening behind the scenes here at the moment, which I’ll be sharing with you as soon as I can.

I want to shout out to Sina Miakhail for her help this week – and, as ever, to Melissa Adams, Katie Carriero, and Astrid Hofer, who are the amazing team behind our Facebook, Instagram, Pinterest and Twitter!

PS. A friend spotted us last week on TV in Poland! Subscribe here to receive all the news from ‘The Human, Earth Project’!