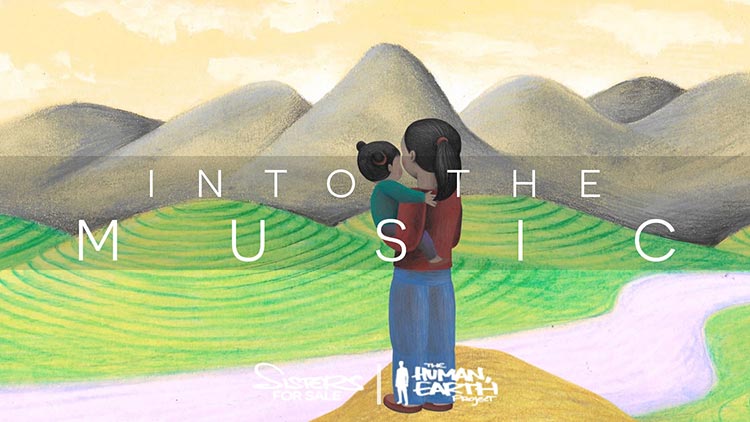 Imagine you’re a painter. For years, you’ve been labouring away on one huge canvas, pouring your heart and soul into it.

Suddenly another artist – someone you barely know – enters the studio and starts painting all over your work. You don’t know which brushes, colours, or even which style they’re going to choose. You’re no longer the artist, but the audience.

That’s how I felt last year, when I handed over our feature documentary, ‘Sisters For Sale’, to be scored. Since then, Johanna Wilson, accompanied by my brother Will Randall, have been working hard to create the music for the film.

Like many aspects of filmmaking, scoring a film is both creative and technical, and far more complex than it seems.

(I shared a sneak preview of the music last week – you can find it here!)

Filmmaking sounds like an exciting job – most of the time, though, it’s not. There are countless long, tedious hours spent on computers, as countless complex pieces come together and fit into place at glacial pace.

Then there are times when filmmaking truly is something special, and exciting. This week has been one of those times, as I’ve been fitting the final version of Joh and Will’s score together with the other elements of the film.

Finally, I’ve had a glimpse of the finished canvas as Joh and Will have imagined it – and it’s stunning. I feel privileged to have witness the creation of something so beautiful.

Like the film itself, the score is composed of many carefully-constructed pieces. All of these pieces fit together and build towards an epic climax involving eight minutes of incredible music by Joh, Will, and Mike Taylor, stunning visuals lushly coloured by Laco Gaal and Jeppe Hildebrandt, and gorgeous artwork by Marta Farina. It’s perfect. The music is now being sent to Curtis Fritsch IV and his team in Los Angeles. Though I haven’t yet introduced you properly, Curtis and his team have been working on the sound design for the film over the last twelve months. They’re now getting ready for the final mix – and then we’re done!

It’s an exciting time and, with the music in place, I’m more excited than ever to share the finished film – watch this space!

Last week I shared the final poster design for the film, which I’m also really excited about. If you’d like to pick up a copy and support our fight against human trafficking, it’s now available for sale here on our website.