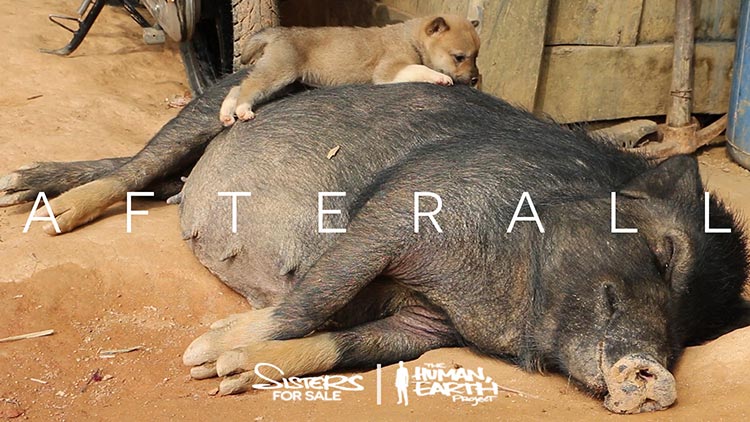 It’s been a wild few weeks here at ‘The Human, Earth Project’.

Our feature documentary, ‘Sisters For Sale’ – conceived in 2013, shot in 2014, scratched together in 2015, finally funded in 2016, cut and polished in 2017, with an original score added just last month – was at last completed this morning.

Getting to this point has been a far longer journey than anticipated, and has at times been a frustrating and highly challenging one. It has taken a colossal effort involving the efforts of dozens, and the support of thousands. It’s fantastic to have finally arrived.

Recently, with the film nearing completion, we’d been looking for a suitable film festival to host our world premiere.

A few weeks ago, we were given an excellent opportunity to premiere next month, at a highly appropriate film festival in Italy. But there was a catch – we needed to deliver a complete Italian translation of the film within three weeks, and we didn’t have one.

Translating a feature film is a huge and time-consuming job. We’d already had ‘Sisters For Sale’ translated into six languages. Each time, we’ve had a team of people working simultaneously on different parts of the script, then a supervising translator to check the entire script. It could take months to produce a quality translation of the full documentary.

Realistically, we had only two weeks for the Italian translation, allowing an extra week to compile, check, export and deliver the finished film. I didn’t know if it would be possible to coordinate a translation in such a short period of time – but decided to give it a shot anyway.

I put a shout-out on social media, and began to assemble a team. Our supervising Spanish translator, Laura Rodriguez Jarillo, shared my message with a community of professional translators – and Elisabetta Disa responded.

That was 7.30pm, on the 12th October. There was no need for a team, Elisabetta assured me. She was confident to deliver the full translation of the documentary herself, in under two weeks.

I didn’t know Elisabetta, and had never seen her work. If I agreed, our world premiere would be riding on the casual assurance of a complete stranger. As with so many things on this project, it was a leap of faith, based on a gut feeling. I jumped – and Elisabetta came through.

Elisabetta delivered the completed translation – 1,534 separate captions, all meticulously translated and perfectly in order – by 11am, on the 26th October. She apologised for having taken so long – she’d been tied up with other work.

Over the past year, I’ve learned quite a bit about translation. There’s an element of lateral thinking and creative problem-solving involved, and it’s clearly not an easy thing to do well. Our script is a particularly tricky one, with so many people in the story speaking English as a second language.

All of our supervising translators have been absolute rockstars. Theirs was a bigger job that I’d first realised, and they’ve all put a huge amount of love and care into their work.

Elisabetta, in completing a full translation so quickly, and entirely by herself, has taken it to a new level. She’s been phenomenal, and a real pleasure to work with.

I once spent 15 months living in Italy. I can understand the language well enough to know that Elisabetta hasn’t just given us a translation – she’s given us an amazing translation.

I was gobsmacked – flabbergasted, even – at what she was able to achieve in such a short period of time. Thanks to Elisabetta, we will have our world premiere in Italy next month.

(Because Elisabetta is from the same region of Italy where the film will be screening, and because I thought it would be a fun thing to do, she’s even translated a little message into the local dialect for me, to display at the beginning of the film!)

Meanwhile, however, ‘Sisters For Sale’ wasn’t quite finished.

After receiving the completed musical score from our composers Johanna N. Wilson and my brother Will M. Randall last month, ‘Sisters For Sale’ had passed into the hands of Curtis Fritsch IV and his team of sound designers at Alphadogs Inc, in Burbank, California.

Curtis has actually been attached to this project since last June, and is way, way overdue for an introduction. For the past 16 months, he has been working quietly away behind the scenes, and waiting for the final pieces to arrive.

I had originally intended to join Curtis and his team at Alphadogs for the final audio mix of the film. Instead, Curtis was in the studio with Yuxin Boon and Juan-Lucas Rafael Flying Eagle Benavidez, while he and I spent the year sending endless lists of notes back and forth across the Pacific.

It’s been a monumental job, involving countless hours spent trawling through files to find the right sounds to construct each scene, and blending them together with the dialogue, narration, and music.

Vietnam and China are extremely noisy locations, and two of the biggest challenges have been avoiding the squawking chickens and roaring motorbikes which so often dominate the soundscapes there. The third biggest challenge, I suppose, was me and my occasional temptation to tweak the film’s edit.

Curtis has been an ideal co-worker – dedicated, patient, optimistic, and energetic – who has poured a huge amount of time into this project. With the festival deadline approaching, I was very impressed by Curtis’ heroic efforts to draw together all the fragments of audio into one cohesive sound mix.

This weekend, Curtis and I both spent long, sleep-deprived days and nights glued to our computers, making final adjustments. At four-thirty this morning, while I grabbed a few hours’ rest, Curtis delivered the final mix – the final element to fall into place on this marathon, 5.5-year documentary project.

I want to thank Curtis, Yuxin, Juan-Lucas, Elisabetta, and each of you for joining us on our long, fascinating journey.

This is not an ending, but a beginning. It’s really only the first step of a much longer journey, and there are already signs it’s going to get a whole lot more interesting before it’s finished.

The next step is to work out how and when it will be made available, especially to those of you who have supported it, and we’ll share the festival details as soon as we have the program.

Well, no – that’s not entirely true. The next step is sleep.