Funny how time slips away 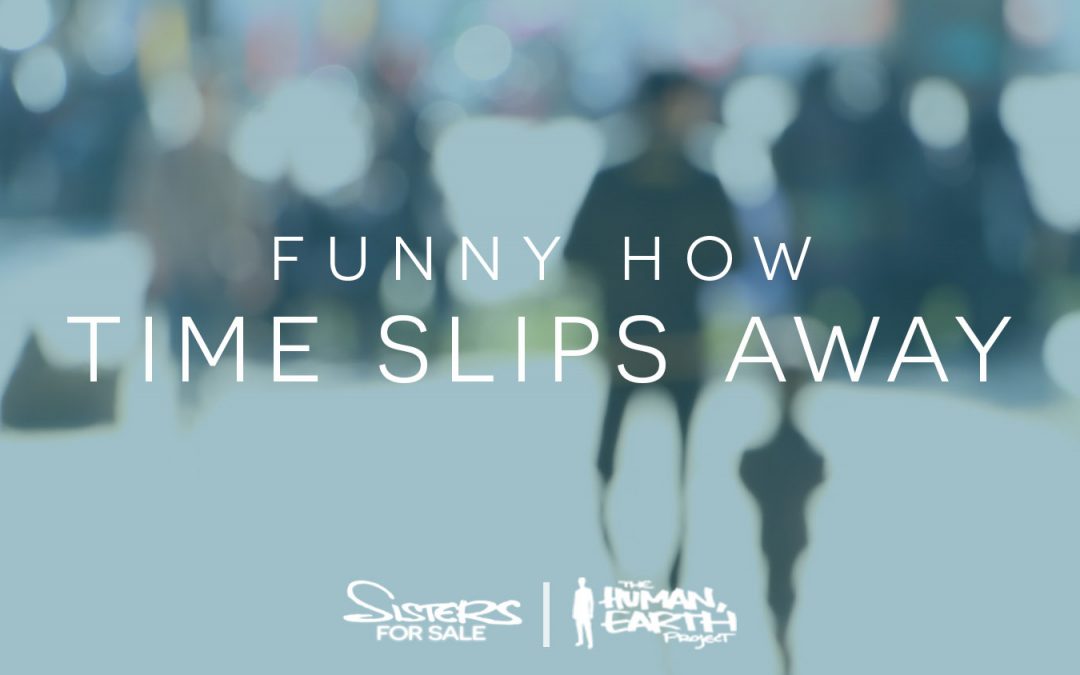 I’m currently staying with friends in a half-constructed house in Asia.

Just a few minutes ago, one of the construction workers stepped inside and saw me typing.

He clearly spoke English as a second language, if at all, and I didn’t know how much he understood. I considered what simple (if misleading) explanation I might give him, before deciding to tell him the truth.

‘No,’ I said. ‘I’m working with an organisation to raise awareness of human trafficking.’

I didn’t know if he’d understood anything I’d said. He blinked, and stood mulling over my words before he finally spoke.

‘Sex slaves,’ he said, in a low, serious voice.

Last week ‘The Human, Earth Project’ passed another milestone, entering its seventh year of operations, and what a long, strange journey it has been.

Inspired by the disappearance of my young Hmong friend May, the project was first launched in February 2013. It centred around an epic search across Asia, to raise awareness of the global human trafficking crisis.

The search for May herself was not the focus of the project, for the simple reason that it was believed impossible.

The incredible and unexpected success of finding May in China soon eclipsed the rest of the project, and became the focus of our feature documentary, ‘Sisters for Sale’.

It hasn’t always been an easy journey – we’ve struggled against a chronic lack of funding, and have worked overtime to keep the project on a solid ethical footing – but the results speak for themselves.

Our human trafficking awareness work has already reached millions of people around the globe, and the wider release of ‘Sisters for Sale’ and its seven translations will vastly amplify the strength of our message.

During production of ‘Sisters for Sale’, I realised that human trafficking was far more complex than I’d imagined. Instead of a single, clearly-defined issue, I found a tangle of interconnected issues, including inequality, ineducation, and capitalism at its most ruthless.

Above all, women’s rights issues lay behind so much of the human trafficking I saw, and ‘The Human, Earth Project’ has been gradually and naturally expanding its scope in that direction.

I’d hoped that ‘Sisters for Sale’ might help my young Hmong friends escape the oppression of their own culture. Now I see the story can be far more than that: it has the power to help us all.

All around the world, in almost every culture – including our own – women are subject to fear, repression and violence. It is regarded as the most systematic and pervasive human rights abuse in the world.

Far too many women are held back from reaching their full potentials – which means that we, as a species, are functioning at a vastly reduced capacity.

I see no Gandhis or Mandelas amongst the men of our generation. I see few great men raised up by the common people, willing to take great personal risks for the sake of the common good – but I do see Malalas, Gretas, and AOCs, and I applaud them.

For centuries, we’ve been telling ourselves stories of bold men rescuing incapable women – in reality, perhaps the opposite will turn out to be closer to the truth.

Some might say that, as a male, I am not the best spokesperson for women’s rights issues – and I agree.

Men have been responsible for most of the repression against women, and that’s exactly why we need men onboard – but the conversation needs to be led by women.

I’ve been the driving force behind ‘The Human, Earth Project’ since the very beginning. I’ve worked hard to manage the project in the same way I manage my life, favouring ethical alternatives over whatever might be easiest or best for me personally.

The best way I can see for ‘The Human, Earth Project’ to fight for women’s rights is for me to give up my role as head of the organisation.

Over the past year, I’ve been joined by a team of six amazing women who have been gradually taking more control over the project, as I step back to a secondary role.

Katie Carriero, from New England, has been taking an increasing role over the past few months, and has now begun guiding the project. Katie has my full trust and support in her new role.

It feels strange to be stepping back from something I’ve poured so much of my life into, but it also feels like the right thing to do – both for the project and for myself. After six years at the helm, I’m ready for a change.

Following interest from one of the world’s leading publishers, I’m now focusing on the expansion of ‘Sisters for Sale’ as a book.

Writing has been a passion of mine since childhood. While writing a book is a huge and often challenging job, it’s work that I enjoy and feel comfortable with. I’ve now completed the first half of the story, and am very pleased with the way it’s coming together.

‘Sisters for Sale’ is a unique and incredible story, and even those of you who have been following the project from the beginning will find plenty of surprises in the book. After making round after round of merciless cuts to the documentary, it’s wonderful to finally be able to tell the story fully.

A few days ago I shared what I’ve written with Sifis Zervoudakis, a friend and author of numerous Greek-language books. I’ve been greatly encouraged by Sifis’ comments, and would like to share them with you:

“I just finished and I can only say wow! The story is fast-paced, moving, well-written – as a writer I tried hard to find flaws but I couldn’t! … Everything had the right pace – I couldn’t stop reading, had lunch in front of the PC… For now, everything is perfect… It looks more like a final draft than a first draft!”

“Really, even with my nit-picky-ness and high standards, all I want to say at this stage is WRITE MORE, PLEASE!”

We’re now starting to plan our tour for the documentary, with screenings and discussions in various locations around the world.

Our most thorough locational data on where our supporters are actually comes from our Facebook page, and we’ll be using that data to help make our tour plans.

If you want us to include your city on the tour, it will really help if you like the page (even if you don’t “follow” it), so we can see where you are – thank you!

With the wider release of the ‘Sisters for Sale’ documentary and then the book, there are big things ahead for ‘The Human, Earth Project’.

We’re now working out the details of how and when the documentary will otherwise be made available to our supporters – thank you for your patience, stay tuned!