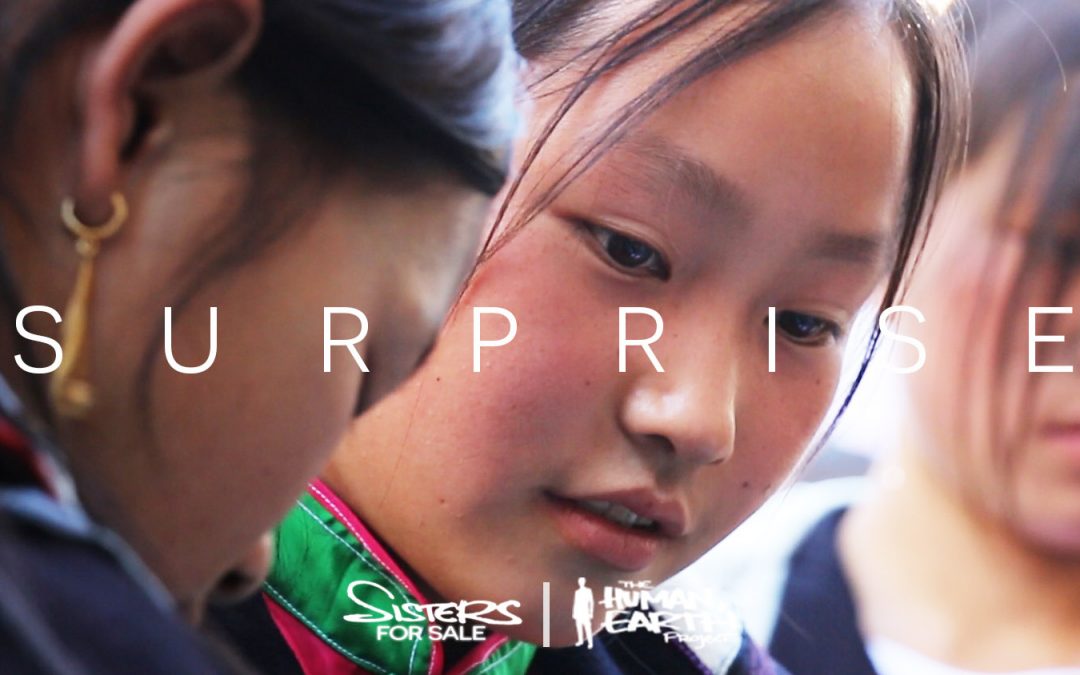 I enjoy surprising people, giving them a little more than they were expecting.

Over the past two weeks, our award-winning documentary, ‘Sisters for Sale’, has been surprising a lot of people – including many of the people who worked on it.

Translating ‘Sisters for Sale’ into seven languages was a massive effort involving 70 people – friends and strangers, amateurs and professionals – from all around the world.

Most of those people were working only with the script, rather than the film itself. I received messages from several of them, telling me how deeply the film’s ending had affected them, even just from reading the script.

It was a wonderful confirmation of the strength of our story, but here’s the funny part: most of those people had never even seen the true ending to script, and knew nothing at all about the final six minutes of the film.

The final section of the film was kept under wraps, shared with our supervising translators and only a handful of others.

I wanted to surprise even those who thought they knew everything about the story, to give them a little something special extra – and I did.

Even now, some of you think you know the whole story of ‘Sisters for Sale’. Many of you have now seen the documentary. Some of you have seen speeches, articles and interviews about the story, and read my blog posts.

Some of you have already read the very special sneak-peek at the first 40 pages of the book we shared for the first time this week.

Let me tell you right now: you have no idea. There’s so much more to this story that has never been told, in the film or anywhere else.

I’ve heard every kind of human trafficking story there is, and there is no other story like this one.

‘Sisters for Sale’ is not a simple story, where everything is neatly resolved and easily forgotten at the end. It’s a story that reveals a series of fascinating and unsuspected truths. It challenges people, and sticks with them.

As one of our supporters said this week, after seeing the film: “I think my perspective of the world changed forever”.

Every screening I’ve attended has provoked countless questions and conversations. That’s why we’re now planning to tour the film, to meet you in person and answer your questions, to connect you directly with this story and the issues behind it.

We’re also working to expand ‘Sisters for Sale’ as a book and podcast, to tell this story properly for the very first time. There’s so much more to this story, and so much more we can do to fight human trafficking.

We want to use the documentary to support two amazing NGOs who rescue kidnapped girls – but we can’t do it without you.

We’re already doing everything we can with the funds we have, and now we need your support to continue. Over the next 48 days, we’ll be running a fundraising campaign to make the book, podcast, and tour a reality.

To thank you for your support, we’re giving away a wonderful set of rewards.

Many of these things – including the film, book and podcast – will be available only until the end of the campaign, so don’t delay.

You can make a difference right now, right here.

Now that you’ve seen the film, many of you have been writing in with questions to learn more.

In November 2016, I hosted an AMA (“Ask Me Anything”) session, which got a huge amount of attention and was voted to the top of the front page on Reddit (“the front page of the Internet”).

Next week – at 7am EST, Tuesday 21st May – I’ll be hosting a second AMA session on Reddit. You’re more than welcome to join me there and ask any questions you may have about the film.

More than 100 of you have already given to our 2019 fundraising appeal.

You can support us now and make a real difference against human trafficking at sistersforsale.com – THANK YOU!